Here’s the latest information ahead of the 2023 24 Hours of Daytona (starting at 7:40 pm French time) and a preview of free practice and the best of the Michelin Pilot Challenge.

During the five free practice sessions that were spread over Thursday and Friday, the best times were shared between Acura, Cadillac and Porsche. If we add up the lap times, it was Richard Westbrook who set the best time at 1’35″185 in #02 Cadillac. This time was set in the second session. In LMP2, it was Mikkel Jensen in TDS. #38 which was fastest in 1 ’38″052.

In the case of GT

In GT, Mercedes is always in the party with 4 best times during the 4 sessions where the GTs were able to run. It was Maro Engel who was fastest in 1’46″011 in the WeatherTech #79.

The officials decided not to change the BOP for the GTs before the race much to the dismay of Porsche, who decided against it to stop running during the test of its parent company Porsche in GTD Pro, Pfaff Motorsport #9.

During the first free practice session, GTD youngster Lucas Auer went violently out of the first corner in the Mercedes AMG GT3 of the Winward team. A victim of a lumbar fracture, he has lost the race. He will be replaced by Canadian Daniel Morad who raced last year in the Mercedes AMG GT3 of the Alegra Motorsport team. The chassis also had to be replaced.

Yesterday was the Michelin Pilot Challenge race which acts as a support race for the 24 Hours of Daytona like every year. As always, this race was hotly contested with many battles on the track, especially for the lead.

The victory went to the #42 Ford Mustang GT4 of Zane Smith and Harrison Burton, two official Ford drivers in NASCAR, Smith being the defending NASCAR Truck champion and Burton the Ford Wood Brother driver in the NASCAR Cup. They are ahead of the #83 Porsche of good old Jeoren Bleekemolen (750th race of his career!), Thomas Collingwood and veteran Spencer Pumpelly, author of a brilliant comeback at the end of the race.

Third place went to the second “NASCAR” Ford Mustang driven by Ben Rhodes and Hailie Deegan which led the race for a while. It was a Ford vs. Porsche battle for most of the race before almost all Porsches fell victim to the unfortunate tragedy of burning out and crashing.

Note the impressive run by former NASCAR driver Chad McCumbee in the #13 Mustang, which stumbled toward the front throughout the race before falling back into the standings at the end of the race. 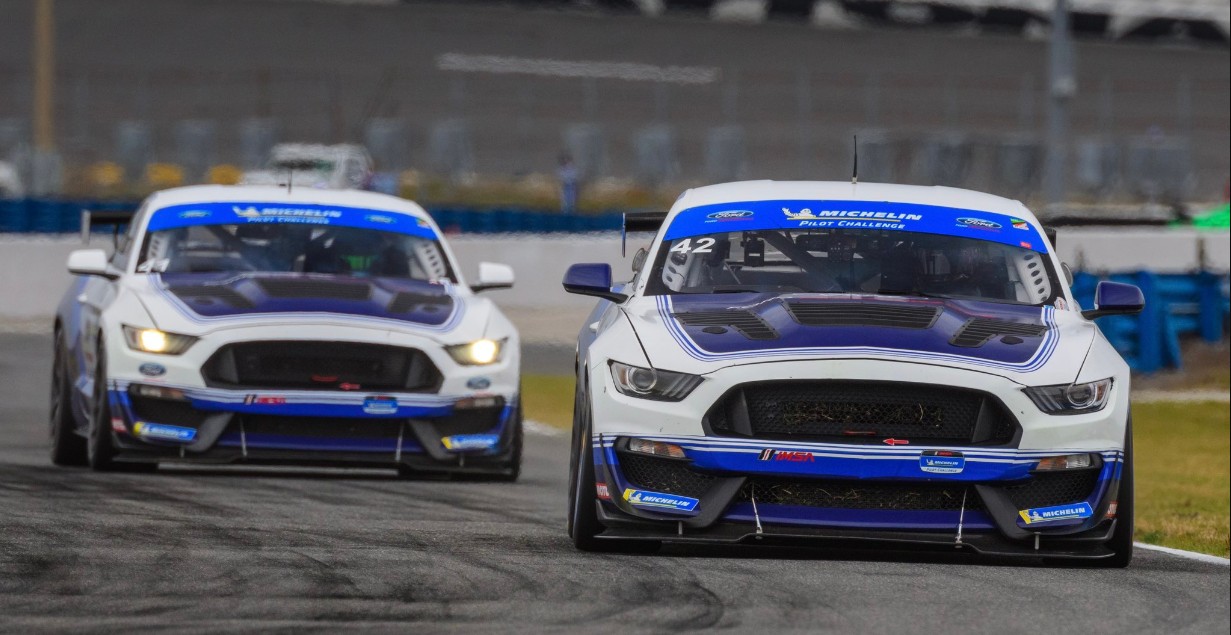 In terms of TCR, it’s a massacre because only 5 out of 14 TCRs that entered finished the race without any problem! The victory went to the Audi RS3 of Gavin Enstone and Jon Morley who had to fight for 30 minutes against the Honda Civic TCR LA World best of Mike Lamarra who finished 2nd. Note that the Hyundai Elantra driven by Robert Wickens and Harry Gottsacker suffered problems various technical issues but the Canadian was able to finish 6th in the race. Denis Dupont’s Audi finished 7th after being pitted.

To follow the 61st edition of the 24 Hours of Daytona

The 24 Hours of Daytona can be followed in full on IMSA.tv and also on Automoto La Chaîne with Anthony Devret, Adrien Paviot, Guénaelle Longy, Gabriel Aubry, Timothé Buret and Guillaume Nedelec in the cockpit. Airs at 7:30 p.m.

Participants, schedules, announcements… How to follow the 24 Hours of Daytona?

Driving equipment: Ford, General Motors and Mercedes on the podium, Tesla behind

Tesla promised, Mercedes did it