RIO DE JANEIRO – The Daytona 24h edition celebrating the new era of IMSA and Sport-Prototypes especially in the main class – now GTP, as in the old days – had the definition of the grid for the 61st edition of this classic motorsport this Sunday. And it was cool to fight for the pole position and for the first places on the grid.

Mainly because Meyer-Shank, who had dominated all sessions, seemed to be out of the bag and, after the red flag and the ‘shot on the needle’ for Tom Blomqvist, the only member of last year’s champion duo to remain. The Nordic-British man held the role, was killed in the chest and did more than anyone thought. He took pole in 1’34″031 and just surpassed last year’s DPi mark by 0″001 – 90 kg lighter than the new cars with hybrid systems.

Another Acura, from Wayne Taylor Racing, saw pole time stolen in the final lap and also a spot on the front row – the Porsche 963 LMDh driven by Brazilian Felipe Nasr positioned itself among the Honda-connected constructor models, and. just 0″083 behind Blomqvist. Three different brands made it into the top five, with two Ganassi Cadillacs following – Sébastien Bourdais needed just one clean lap to overtake Alex Lynn.

Pipo Derani was sixth in 1’34″608 in front of two BMWs – one of which will be Augusto Farfus. Penske’s #6 Porsche was ‘spinning’ around the time of Acura #10 with Nick Tandy on board, but the Brits went into overdrive and ran into the tire barrier set up at the Bus Stop. By triggering the red flag, he lost all laps recorded and started ninth and last in the division.

LMP2 practice was also interrupted by red flags, with John Farano’s heavy crash at the same place where Tandy crashed. Tower Motorsports’ Oreca prototype was damaged at the rear due to impact with the tire guards. This event benefited Ben Keating and PR1/Mathiasen, who took the lead in the junior class with a time of 1’40″541, beating the #35 TDS Racing team with François Heriau by one and twelve seconds.

Steven Thomas took another car from Xavier Combet’s team to third, followed by François Perrodo (AF Corse) and George Kurtz (Crowdstrike Racing and APR). Eric Lux, a member of Pietro Fittipaldi’s team – Rick Ware Racing – was in 6th place after problems with Farano and Fred Poordad, another who also crashed during the red flag with a Proton Racing car.

In LMP3, the pole row during the 15 minutes of open track was fierce and involved at least four cars and drivers. Nico Pino of Chile won #33 of Sean Creech Motorsport, reaching 1’43″197 against 1’43″307 of Dakota Dickerson, of Andretti. 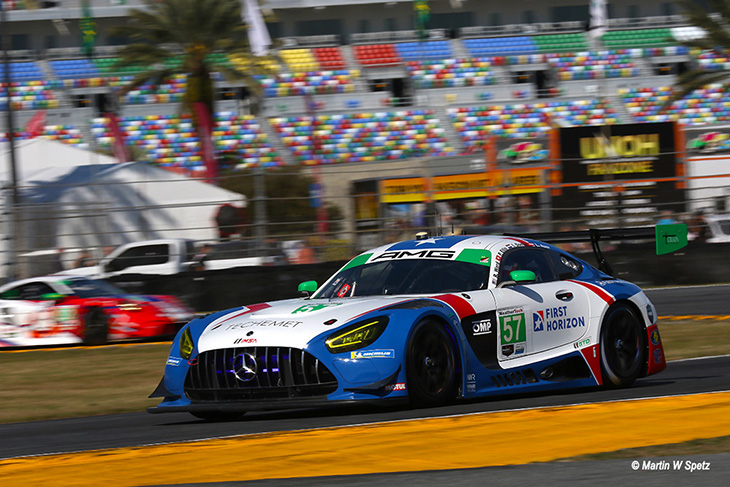 Between GTD and GTD Pro, four Mercedes-AMG GT3s in the top four positions and three GTDs beating the GTD Pros: Winward took the best time of the 33 Grand Turismo models present with Phillip Ellis registering 1’46″093 against 1. The ’46″312 with Fabian Schiller (Sun Energy 1) and Mikaël Grenier third with a Team Korthoff Motorsports car.

Next up was Maro Engel as a GTD Pro pole and Weather Racing car, followed by The Heart of Racing’s Aston Martin with Ross Gunn on board and the top 3 in class still had the Lexus RC-F driven by Ben Barnicoat.

Risi did not go well: Daniel Serra was only 9th among the GTD Pros and 56th overall.

Track action at the 24 Hours of Daytona resumes on Thursday with more free practice sessions and track action on Friday. The weekend race will start on Saturday at 15:10 GMT.