Honda is retiring the NSX super sports car for a special series. It gives more power, but is limited to 350 units.

In 2016, after many delays, Honda finally introduced a new generation of NSX supercar in the beginning. He competed with an electric car and only under the luxury label Acura. For the 2022 model year, the death knell sounds again for the NSX. Mourners graced Honda with the Ultimate Edition. The Acura NSX Type S has just been unveiled at the Monterey Auto Week. Only 350 copies will be released worldwide, 300 of which will be reserved for the US market only. Also new is that the NSX Type S will be offered outside of Japan. It is already clear – it will be a collector’s item. In addition, the first example of the special series will be offered for sale directly in Monterey at auction.

More power for the final

And for the finale, Honda goes out again. While the NSX with its 3.5-liter V6 biturbo hybrid has so far produced 581 hp, the Type S enters the final with a full 600 horses. The maximum torque also increases and is now given as 667 Nm. Additional power is provided by new turbochargers, new V6 turbochargers with six percent higher pressure, 20 percent more battery capacity (now 1.3 kWh) and ten percent more battery power (now 60 kW). The nine-speed dual-clutch transmission has also been beefed up. When shifting up, the gears should slide 50 percent faster, by reducing the gearbox was given a new fast shifting mode. The drive package is rounded out by a new balanced all-wheel drive program with torque vectoring and a compact translation of two electric motors on the front axle. The available four-way steering and suspension components have also been restored.

Honda/Acura is saying goodbye to the NSX.

A wider track on both axles also ensures greater cornering speed. This is implemented by new forged wheels with five spokes – in black, optionally with a matt or glossy finish – and different offsets – about ten millimeters in the front and 20 millimeters in the back. Special Pirelli P-Zero tires in dimensions 245/35ZR19 at the front and 305/30ZR20 at the rear contribute to more grip. The standard six-piston Brembo calipers are painted red. A carbon-ceramic brake system is available as an option. Acura has not yet revealed what all this brings in km / h and seconds. 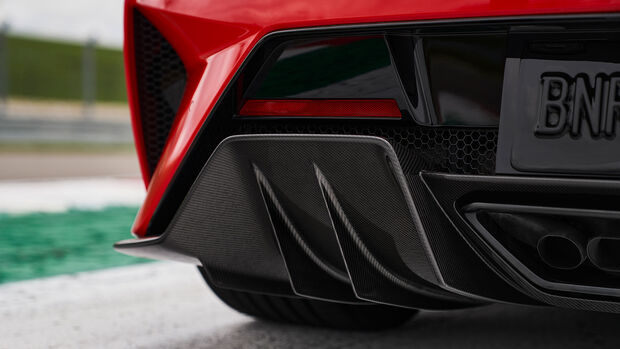 Visually, the Type S is distinguished by a new front apron with enlarged and additional air intakes and a carbon diffuser borrowed from the GT3 racing car. Carbon also provides the material for the front spoiler, rear spoiler lip, side skirts and the entire roof. The mirrors, door handles and exhaust pipes have a black finish. The front and rear lights were turned off and the engine received a red cover. There are also many Type S labels on the body. The optional lightweight package adds more carbon to the NSX Type S and saves around 26kg of weight.

Example as a successor

The Japanese have not yet decided if the NSX will have a successor. The new NSX may be electric only. “Acura is a performance brand, a company with passion, and we will continue to move forward and fully explore what the next generation of sports cars should look like in the electric age,” said Jon Ikeda, Acura’s vice president and chief brand officer.

Great! The concept of the future.

Honda is ending the NSX supercar era. 2022 will be the model’s last year. As a farewell, the Japanese are launching the final version in the form of the Type S. With 600 hp more power and a new improved chassis with all-wheel drive, it offers more driving dynamics. Type S is not coming to Europe.