The second reason, not so important, is the understandable operating costs, which nowadays favor electric vehicles. The price of diesel and petrol is rising at an alarming rate, especially compared to the cost of electricity. Cheap operation, low running cost and amazing driving experience. Is there any element missing from this equation?

The Ford Mustang Mach-E is an all-new, electric SUV with the soul of the classic Ford Mustang, inspired by its design. The new design combines tradition and modernity and makes you careless.

When designing their first electric model, Ford engineers said that a car of this type must evoke real emotions and give pleasure from every kilometer traveled. With this in mind, and honoring the legend of the Mustang sports car, the Ford Mustang Mach-E was created – the fastest Mustang in history, which since its inception has caused a lot of sensation in the automotive world.

As it turned out, the electric Mustang did not need to be convinced either by lovers of the original story, or by customers who do not follow the cult of the Americans “V-Eight”, who started their journey with electricity and electricity. choosing the Mustang Mach-E as their first electric car. With an attractive design, consistent range, impressive performance and innovative systems, the Mustang Mach-E has left the competition far behind, becoming the best-selling electric car in Poland.

Is it easy to decide to buy one of the most attractive Ford models of recent decades? It is enough to drive a few kilometers behind the wheel of an electric car to understand where their growing popularity comes from. Fast acceleration known only from the best sports cars of internal combustion, traveling in almost complete silence, quick response to the gas, and in addition, the lack of many components in the car line, which in combustion cars is less of periodic replacement or maintenance.

Although it is “electricity” that some people mistakenly associate with complex, and even experimental cars from the distant future, in practice it turns out that driving and driving electric cars, compared to their combustion counterparts, is … easier and cheaper . How is it possible?

Due to strict production standards and customer requirements, in terms of the development trends of modern cars and traditional drives, manufacturers are forced to create more complex and complex combustion engines. Turbochargers, diesel particulate filters, two-mass flywheels – there is nothing like it in electrical equipment. There is also no need to change the engine oil, period, and there will be no failure of the head gasket.

Fewer parts to replace or repair means more reliability. The electric vehicle inspection comes to check the electric motor, brake condition and update the software. In the Ford Mustang Mach-E, the final operation does not even require a visit to the workshop – the car updates itself thanks to Internet access. Frequent, automatic updates allow you to avoid many errors or mistakes, while always ensuring the latest solutions and improvements for many years.

Reliability, low running costs and the exceptional popularity of the Mustang Mach-E means that the loss of value of this model over the years is minimal. This, in turn, affects the possibility of getting a great financing benefit for this electric Ford, regardless of whether we intend to buy it on credit, in a company lease, or use it as part of a long-term lease with affordable monthly payments . . At the time of purchase, drivers can also use subsidies from the government program “My Electrician”, to get up to PLN 27,000 in subsidies for the Mustang Mach-E, if they are holders of the Large Family Card.

Where can an electric car be charged? There are more and more payment points available to the public with each passing day, and what is very important, faster and faster payment points are connected to the Internet, which allows you to quickly fill the column. In the Mustang Mach-E, when we charge with a power of 150 kW, we will get up to 119 kilometers in just 10 minutes.

Charging can also be done at home, eg using a Ford Connected Wallbox charger, or even from a standard 230V household socket. It is worth knowing that the Mustang Mach-E offers up to 610 kilometers of range with fully charged batteries! This is the final proof that electric car transport is possible even over long distances. Thanks to the SYNC 4A onboard system, you can easily find public charging stations and plan your route so that you can go on a journey of hundreds or even thousands of kilometers! 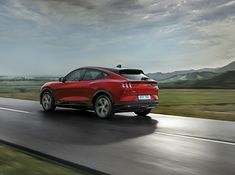 Mustang Mach-E offers up to 610 km of range with fully charged batteries! The Ford Mustang Mach-E is available with two types of batteries. The standard battery (75 kWh) provides a range of up to 450 km, and the battery with increased capacity (98 kWh) up to 610 km.

When you get behind the wheel of an electric car, you’ll immediately notice the difference in ride quality. As the full torque of the electric motor is immediately available – almost from the moment you start driving. The impressive acceleration from 0 to 100 km / h, which is up to 3.7 seconds in the Mustang Mach-E GT version, is something unheard of in a civilian car. This cannot be compared to anything, except perhaps the feeling of acceleration in a departing plane. In addition, there is also almost noiseless driving, even at high speeds.

In the city, however, more benefits await: the possibility of using the bus lines, which helps to avoid traffic jams and significantly reduce travel time, free parking and free payment points, which are available, among others. in hotels or supermarkets. It is also worth mentioning the planned implementation of Clean Transport Zones, which only drivers of fully electric vehicles will be able to legally enter.

In turn, the story of the Ford Mustang in the new version of the Mach-E model, from the beginning of this model, continues and has been supplemented by another, successful chapter. Mustang Mach-E is one of the most popular electric cars in Poland, which is confirmed not only by sales results, but also by the titles of Car of The Year Polska 2022 and The Best of Moto 2021.

Ford Bronco will arrive in Europe. What does this model offer?

The Success Mustang Mach-e is a surprise for Ford itself

Ford Mustang: The S650 model has been seized

Volvo Car Poland sums up 2021 and presents plans for 2022 • AutoCentrum.pl