When it comes to electrification, Chevrolet is fully committed to the Bolt. Kompakt Stromer will be revised in 2021 and will have an SUV sibling. The Chevrolet Bolt EUV also has a new Super Cruise assist system.

Chevrolet is revamping the Bolt EV and offering a modern electric version and a decent SUV to boot. Based on the name of the sister model, it will be called Bolt EUV. Both models will be released in the summer of 2021. Prices have already been set: the Chevrolet Bolt EV will cost at least $31,995 (currently equivalent to around €26,400); making it $5,000 cheaper than the pre-facelift model. The EUV version is $2,000 more expensive than the Bolt EV.

EUV stands for “Electric Utility Vehicle”. So it’s not a typical SUV, but a crossover somewhere between a station wagon with a high roof and a fun car. Bolt EV and EUV use the same drive arrangement: The electric motor of 150 kW / 204 hp, which produces a maximum torque of 360 Newton meters, works on the front axle. The machine draws its energy from a 65 kilowatt-hour lithium-ion battery, which weighs 430 kg and consists of 288 cells and is mounted on the bottom between the axles. Ranges vary slightly: Chevrolet quotes 416 kilometers for the Bolt EV; The Bolt EUV should reach 402 kilometers on a single charge. The driver controls the recovery at the touch of a button using various driving modes.

The battery can be charged with new energy either from a standard household outlet (they work with 120 volts in the US) or 7.2 kW (from a 240 volt charging box). Special feature: Only one cable is needed for this, because identical plugs can be replaced. A dual charging cable comes as standard, and Chevrolet will also cover the cost of installing a home charging box. Bolt EV and EUV can be charged at a maximum of eleven kilowatts; then the electric car sibling draws energy for about 160 km more in about half an hour. However, an additional cable is required for this, for which an additional charge should be paid.

GM has had the platform used by the Bolt EV and the EUV version on the market since 2016. Despite common technical genes and a clearly recognizable relationship, Chevrolet insists that no body part is the same between the siblings. The front of the EUV seems to be stronger, the headlights move slightly away from the bumper in the vertical direction. In the side view, a slightly set back passenger cell without triangular front windows, relatively relaxed lines and roof rails are seen on the Bolt EUV. At the back, both versions of the model differ primarily in the light image. The Bolt EV’s tailgate extends to the rear quarter panels, while the EV’s tailgate goes straight in a vertical direction.

Although the Bolt EUV looks significantly “more SUV-ish” than the Bolt EV, it’s hardly taller. There is also only a slight difference in weight (1,669 instead of 1,628 kg). But EUV is about 15 cm longer. Almost half of this is due to the longer wheelbase, which should benefit the space available for rear passengers. However, a long car does not provide a large trunk. On the contrary: with 462 instead of 470 liters (1,611 instead of 1,614 with the rear seat back folded down), the luggage compartment EUV is even less.

Both models are similar in the cockpit. Behind the flat-bottom steering wheel is an eight-inch instrument display, the display of which can be configured. A 10.2-inch center console “Power Flow Screen” with touch controls for the air conditioning system provides occupants with important information about their electric vehicle. Instead of using a gear selector lever, gears are selected using a button, resulting in a neater center console.

Mobile phones can be connected via Apple CarPlay and Android Auto, as well as wireless charging and the Bolt siblings can use it as a Wi-Fi hotspot to access the Internet. In addition to various applications, Amazon Alexa is also on board: the assistant accepts voice commands, which can be used to control many functions of the car. The health of both models can be monitored remotely through the app.

The Bolt EUV will be the first Chevrolet to have Super Cruise. Although he has to do without the task of changing lanes independently, the driver assistance system largely enables semi-autonomous driving. The whole thing is based on lidar technology and an alert assistant. This uses a small camera mounted on the steering column and infrared lights to determine where the driver is looking when Super Cruise is operating. If the system determines that the driver is taking his eyes off the traffic situation for too long, it draws his attention to his absence at several levels of ascent. First with a light on the steering wheel, later with other visual and acoustic signals. 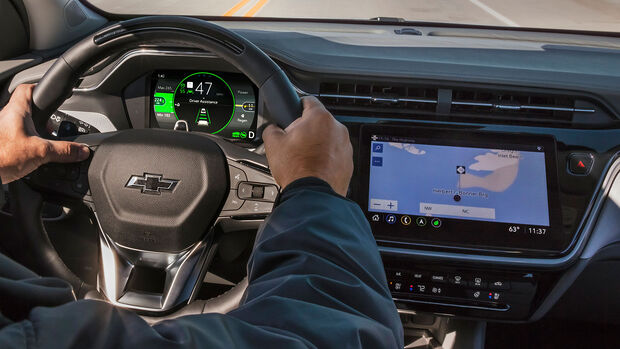 The Bolt EUV is the first Chevrolet to receive the new Super Cruise driver assistance package.

Currently, Super Cruise is only available on the Chevrolet Bolt EUV, and that too as an option only. In an introductory version called Launch Edition, however, it is already on board. Priced at $43,495, there’s also a sunroof, custom-designed wheels, an illuminated charging port, and various plaques. The version structure can already be saved.

Is the Bolt-E family coming?

Rumor has it that it is now even possible to expand the Bolt into a full electric family. In addition to the EUV, the platform would easily form a crossover coupé. A sedan in the style of the Tesla Model 3 would certainly work around the world in one market or another. And if larger electronic platforms are also available through GM’s sister company Cadillac, why not also think about the Bolt image?

No, I’m still afraid of the range and charging time.

Considering Tesla’s success, it is often forgotten that GM has had an electric car with a respectable lineup at a very competitive price on the market since 2017 with the Bolt. Accordingly, it makes sense to put more models on wheels on its platform and thus expand the range of the electric vehicle group. Maybe that will bring the numbers to match.

From the Chevrolet Camaro maybe (2019)