About two years ago, containers slipped off a ship off the coast of Australia. Rescue teams have now found a picture in one.

Shortly after midnight on July 1, 2018: The container ship YM Efficiency ran into heavy seas 25 kilometers off the coast of Australia. The storm is so violent that 81 of the loaded containers fall overboard and YM Efficiency sustains the destruction of its supporting structures. The waves washed a few containers ashore near the city of Newcastle, about 160 kilometers north-east of Sydney. The rest remain lying under the sea at a depth of 120 metres. Australia’s maritime safety authority AMSA (Australian Maritime Safety Authority) is now recovering the containers – and has found an iconic image in one.

It is bent along with the vessel

The container is slightly crumpled and bent as it fell off the ship – and so did its contents. the blue one Chevy Silverado Although the Heavy Duty is easily recognizable as such, there is no doubt even at a glance that it is ready for the scrap heap. The right-hand-drive model intended for Australian road traffic was not cheap: the Newcastle Herald puts the price at around 150,000 Australian dollars (currently equivalent to 87,862 euros) – in the US the standard driving models for left hand and heavy. -duty orders start at $34,100 (€31,472). Among other things, the long transport route to Australia is said to have increased the price.

The contents of all the containers found stink to heaven – hundreds of tires are packed in them.

AMSA has yet to release any photos of the Silverado’s interior. However, AMSA project manager Scott Wilson insists the pickup’s windows were down and the interior had been flooded for months and is now unusable. The agency is deleting Chevy. 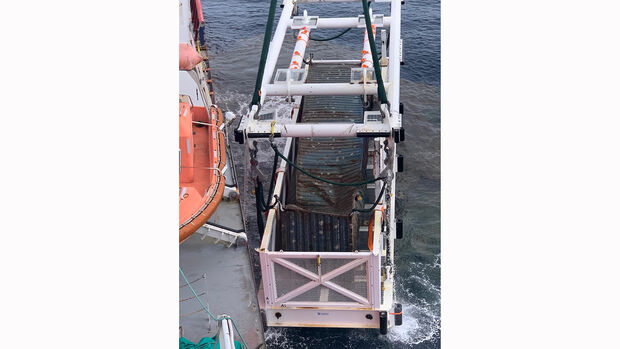 All salvaged containers are opened by AMSA professionals wearing protective equipment. An unbearable stench emanates from each container, project manager Wilson shakes. Rescue workers found hundreds of car tires in some containers, copper in others, and unidentifiable trash in others.

In total, AMSA has to rescue 62 containers from the bottom of the sea. So far, the move has cost 15 million Australian dollars (8.78 million euros). The rescue work should be completed by the end of April.

Yes, then that would be a collector’s item with a special history.

No, that’s many times over the new price.

A warped Chevrolet Silverado scarred by 22 months of saltwater exposure is a sight to behold. But the car can no longer be saved, it is a case of proper disposal. The Australian Maritime Safety Authority does not recover containers that have fallen from the bottom of the sea because of curiosity, but to ensure the safety of ship traffic and prevent or reduce environmental pollution from lost cargo.

Land Rover Kite Cup For Us!

Land Rover Kite Cup For Us!

The strong entry of Mateusz Klich, the embarrassment of Cash’s colleagues. Great goal in the Newcastle game [WIDEO]

Hyundai is the first self-driving ship to sail at sea

No more nauseous looking at your phone in the car? That’s how it is

Windows 11: Windows 11 22H2 in experiment: What does the update bring to the computer?

“We are back”: German Mitsubishi CEO Werner Frey in an interview

We already know what the electric successor of the Volvo XC90 looks like. Patent drawings have been leaked online