The streets of America’s cities are on fire. Cold War with China. Attack on the Capitol.

Over the years, the image of the United States as a role model for other countries has been collapsing at an alarming rate. What is emerging from behind it? The attack by supporters of Donald Trump on the Capitol after losing the election, conspiracy theories under the sign of QAnon, the collapse of the economy in the rust belt, the culture war: for abortion, for the climate, for access to weapons. Systemic discrimination continues to thrive here, and people of Asian descent are also suffering from increased conflict and technological competition with China. America today is a house divided by conflict – which is changing an already divided society.

“A house divided cannot stand” – these famous words of Abraham Lincoln remembered during the election campaign Joe Biden. Will the new president, who soon after taking office began to lose public support quickly, be able to make reforms to strengthen the country? Is the unsuccessful exit from Afghanistan, failure in the “war on terror” in the Middle East? and the growing difficulty of stopping the actions of Vladimir Putin is the end of American world leadership?

Andrzej Kohut, in his book America.A House Divided, analyzes the events and problems of recent years, giving us one of the most complete pictures of America today.

The book can be purchased at the link. 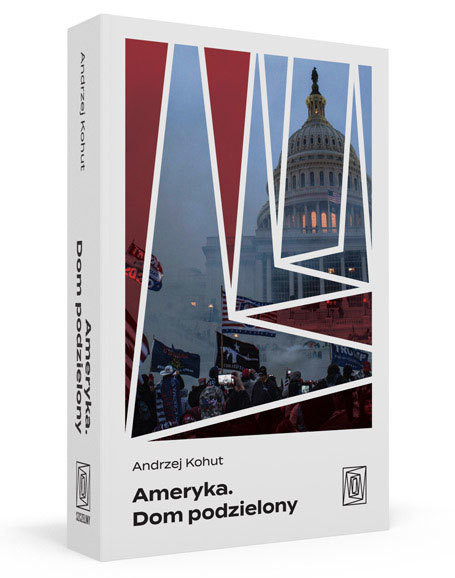 It is the fault of a gang of sleepers

A month after the election, in early December 2016, a bearded man in a navy blue T-shirt, 28-year-old North Carolina native Edgar Maddison Welch, walked into an obscure Washington pizzeria called Comet Ping Pong. There would be nothing strange about it, if not for the fact that Welch had an AR-15 rifle and a loaded pistol with him. It would not seem strange either (after all, in America many people have guns, and heart attacks are common) if it were not for the fact that Welch came (be careful!) to investigate. According to the famous then The conspiracy theory was being perpetuated in Washington by a gang of pedophiles, including Hillary Clinton. And the children had to be kept in the basement of the pizzeria. Outraged by the brutality, the North Carolina resident decided to take justice himself, freeing innocent prisoners. After a short investigation (and after firing a few shots), he realized, however, that this story was Internet nonsense. The place didn’t even have a basement. 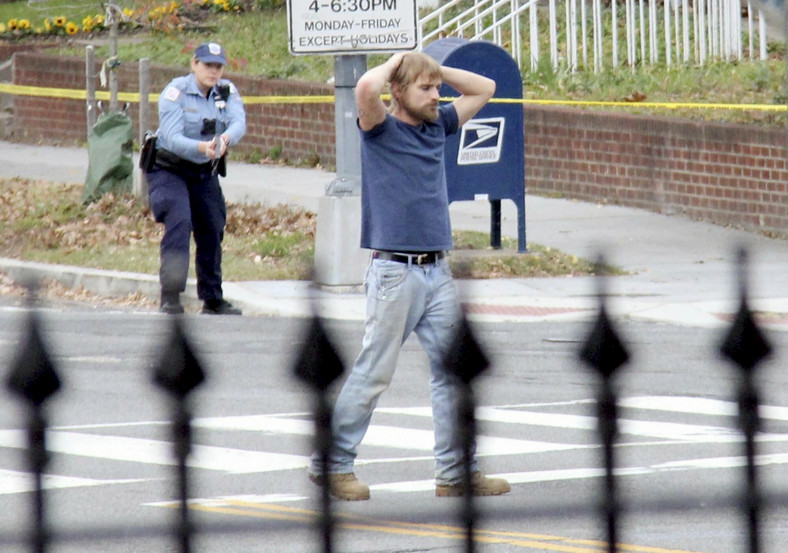 A remorseful Welch surrendered to the police. Despite this, he did not escape punishment for this incident, spending 4 years in prison. Interestingly, he was most likely driven by good intentions. On the Internet you can still find the messages he recorded to his daughters on his “mission” trip. In it, he talks about how much he loves them and that’s why he doesn’t want them and other children to grow up in a world ruled by evil. An ordinary visitor, with a beard and a black hat, he was clearly engaged in the difficult task that he took on his shoulders. For several months he studied the evidence of the existence of a circle of children within the structure of the Democratic Party, and that clear effects were visible. John Podesta’s (Clinton’s campaign chief) emails were leaked online. Perhaps he had listened to Alex Jones of the website InfoWars clamoring for an investigation into Pizzagate, arguing in one of the films that Hillary Clinton “killed, dismembered and raped” children (thankfully, that material is now blocked). Every subsequent article read on the web that Welch came across confirmed a story that was solid for him. He didn’t trust the mainstream media. After all, sometimes they hid the truth! Kennedy was killed because of the actions of the CIA, the filmmakers filmed the Moon landing in Nevada. The Bush administration was responsible for the 9/11 attacks. The plane that hit the Pentagon was not even there! Shooting at Sandy Hook School, where more than 20 people were killed, was the stage. In the mysterious area 51, the government is hiding aliens. And the world is ruled by the Illuminati behind the scenes.

The statements quoted represent popular conspiracy theories in American society. Others only go to highly suspicious citizens. Most Americans do not doubt that the moon landing happened (only 11 percent of respondents say otherwise), and storing aliens somewhere in the desert is unlikely. Other theories are considered more valid – one in five US citizens believe that the attack on the New York World Trade Center skyscrapers could not have been the result of random terrorists. According to a Gallup survey, more than 60 percent of Americans are looking for a conspiracy in the assassination of President Kennedy, not believing that his killer could have acted on his own. It is difficult to explain the historical events over the years that have attracted those who would like to combine the scattered pieces of the puzzle in a more interesting way. Until recently, however, conspiracy theories carried little political weight.

The Internet has changed it, where there are thousands of sources of information, and each one (at least on the surface) seems reliable. The position of the given material in the search engine has become important – what will be shown first when the user enters his query, as well as the speed with which the material is distributed among users of social networks. Nothing spreads as quickly as arguments. Thus, the news that Hillary Clinton keeps children’s corpses in the basement of a pizzeria beat the news that the Democratic candidate gave a speech on tax reform. It is easy for a user who encounters one piece of information to “open his eyes” to believe what follows from the same source. If he has never believed the message of traditional media before, he will lock himself in a bubble of extreme news. This is what happened to Welch.

Why am I still analyzing the story of a guy who a few years ago entered a restaurant with a gun in his hand, having previously read unverified information on the Internet? Because this is just the beginning of the story. To clarify it, contact the source of Pizzagate.

Before the presidential election in 2016, at the end of October, WikiLeaks published the emails of John Podesta, the head of Hillary Clinton’s campaign, stolen by Russian hackers. Among them there was one called pizza.jpg. It had a picture of 3 people eating … pizza. One of them was a little girl. An anonymous 4chan user took the photo as evidence of Clinton’s staff involvement in child trafficking.

The website 4chan is like an online pool that is used to exchange memes, often politically incorrect. In 2016, it reached the peak of popularity, also gaining influence on domestic politics. Strange is the time when images of Pepe the frog (taken from Matt Furie’s comedy “Boys Club”), popular on the website 4chan, were considered by Hillary Clinton’s staff to be a serious threat to social order. Unknown citizens portrayed Pepe as an SS man, a murderer of Jews, or a Donald Trump haircut. In a special statement, the Democrats announced that the frog has become a new symbol of the radical right. It seems like an exaggeration, but Clinton’s staff got one thing right. Users of platforms such as 4chan or Reddit, by disparaging and mocking Clinton (also through the pizza story), gave great support to Donald Trump. Even if the Republican candidate himself was not taken seriously. When Trump won, one 4chan user commented, “We elected a meme for president!”

Almost a year after the 4chan community celebrated Trump’s victory and Pizzagate led to Welch’s desperate decision, another anonymous user, Q (QAnon), posted on the site saying that the arrests of many gang members infants were. almost.. From that moment on, a new conspiracy theory was born, the “mother of all theories” that explains not only one event (like the Kennedy attack), but also how the world works, using dozens of sub-theories. 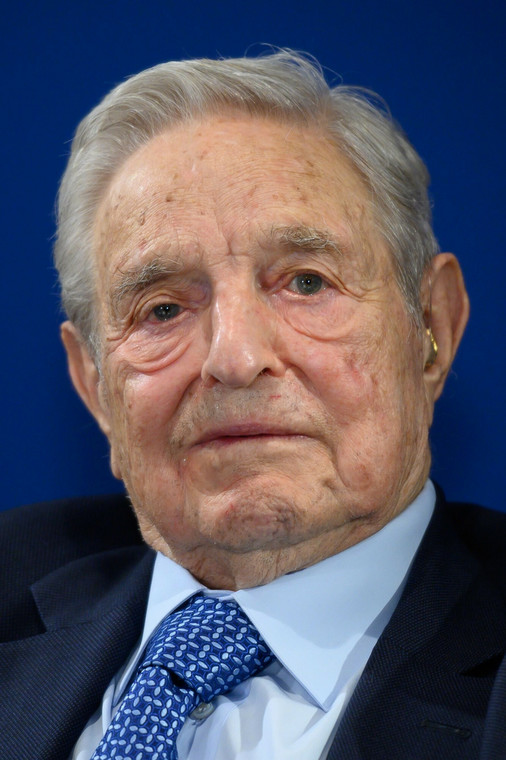 According to QAnon followers, the world is ruled by a group of satanic elites who maintain control of the US government. There is a place in the mysterious plot for the traditional heroes of this kind of theory: the Rothschilds or George Soros. The only true and final hero is Donald Trump, whom the military has chosen to end the power of the secret gang. The climax of the final hearing will be the sending of Hillary Clinton to Guantánamo Bay. Sounds like a silly C-movie script, doesn’t it?

The problem is that many people believe it. As many as 15 percent of Americans declare that power may be in the hands of Satanic oppressors. Donald Trump knew about the growing popularity of the mysterious Q, so he used it skillfully. He posted entries that contained elements of his message. Perhaps he even believed some of Q’s revelations. This is especially true in the final stages of his presidency, when QAnon announced “evidence” of election fraud. When Trump asked Georgia’s Secretary of State to find missing votes to overturn the election results (a call that was later leaked to the media and scandal erupted), he repeatedly referred to QAnon’s “results,” calling them “rumors spread over the issue that.” Globalization.” Not only did he believe – On January 6, the Capitol was the site of the biggest conspiracy theory victory in American history..

Conspiracy theories have proved to be the cheapest form of weapon that can be used against America. Mueller’s commission found no evidence of ties between the Russians and the Trump campaign. However, he revealed evidence of the actions of Russian trolls on the Internet, which shows that the Kremlin did not try to get Trump elected president at all costs, because the increase in social divisions turned out to be more important. Countries that want to harm the United States, including Russia, do not need to make up their own stories. Conspiracy theories available on the Internet are enough for them: Pizzagate, bad 5G masts, a disaster planned by Bill Gates or a rigged election. It can be changed for a long time. In recent years, there was probably no conspiracy theory that would not have been picked up by the army of Russian trolls operating on the American Internet.

One of the reasons for the increase in American belief in conspiracy theories is undoubtedly the decrease in trust in the media and the government. Analysis by the Pew Research Center shows that the confidence index has reached the lowest level in the history of its research, ie since the late 1950s. This allows movements like QAnon to grow in strength. Furthermore, politicians are starting to build their careers on the popularity of conspiracy theories. People who openly play with QAnon supporters are already running for office, such as Marjorie Taylor Greene, who has been sitting in Congress since 2021. Her statements were big, in which she suggested, among other things, that mass shootings were organized by supporters of strict gun control, the plane that hit the Pentagon was not there, and the Rothschilds are behind the fire in California. As you can see, conspiracy theories can easily enter the political mainstream.

How can you learn theory easily

Giuliani, Trump’s former lawyer, is under investigation. He tried to annul the election

Mazda: He sees the future in many ways. Not one car!

Ford Saarlouis: Instead of tender competition and betrayal – fight to defend all jobs in all areas!

Musk wants Trump not to run for president Abroad

Trump Organization, former CFO in October to be brought to court for tax fraud in New York