It has long been known that racing is a testing ground where ideas are distilled on the way to the perfect motorcycle. The idea for the Suzuki GSX-R 750 emerged nowhere else but on the racetrack.

When Kevin Schwantz won the world championship in the 500 cc class on a Suzuki RGV in 1993, few could have imagined that the direct result of this would be this motorcycle – built to win – the GSX-R 750. Same as ten years ago (as in 1995 , 37 years from now, editor’s note) The first Suzuki to bear this name appeared, and the motorcycle world held its breath. 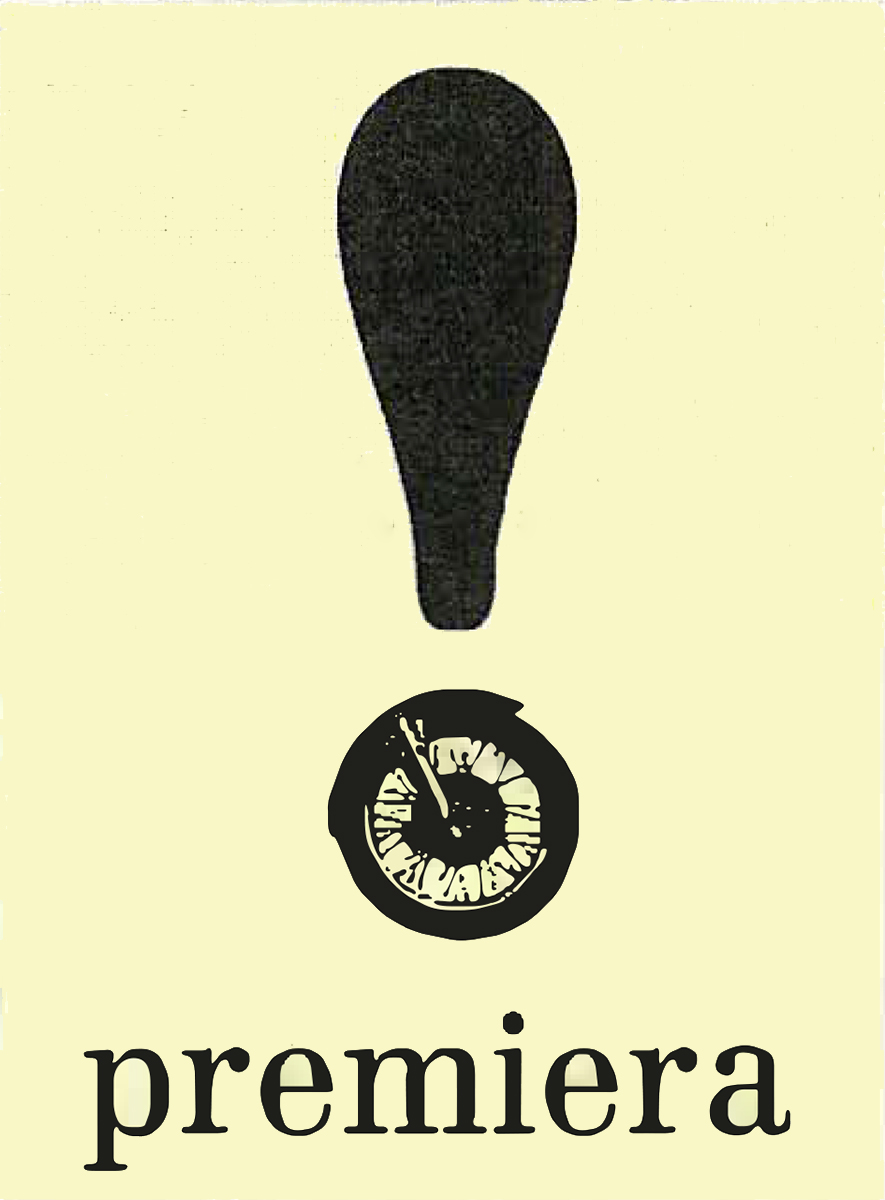 For the first time, a “private” motorcyclist could, for good money, buy a motorcycle with a hundred horsepower, and at the same time light enough to move like the two-wheeled racers of the asphalt track heroes of that time. However, over the years, the GSX-R 750 “grew in feathers” and gained a lot of kilograms, several dozen. The simple result of this was that the Suzuki was not among the best bikes in Superbike racing. 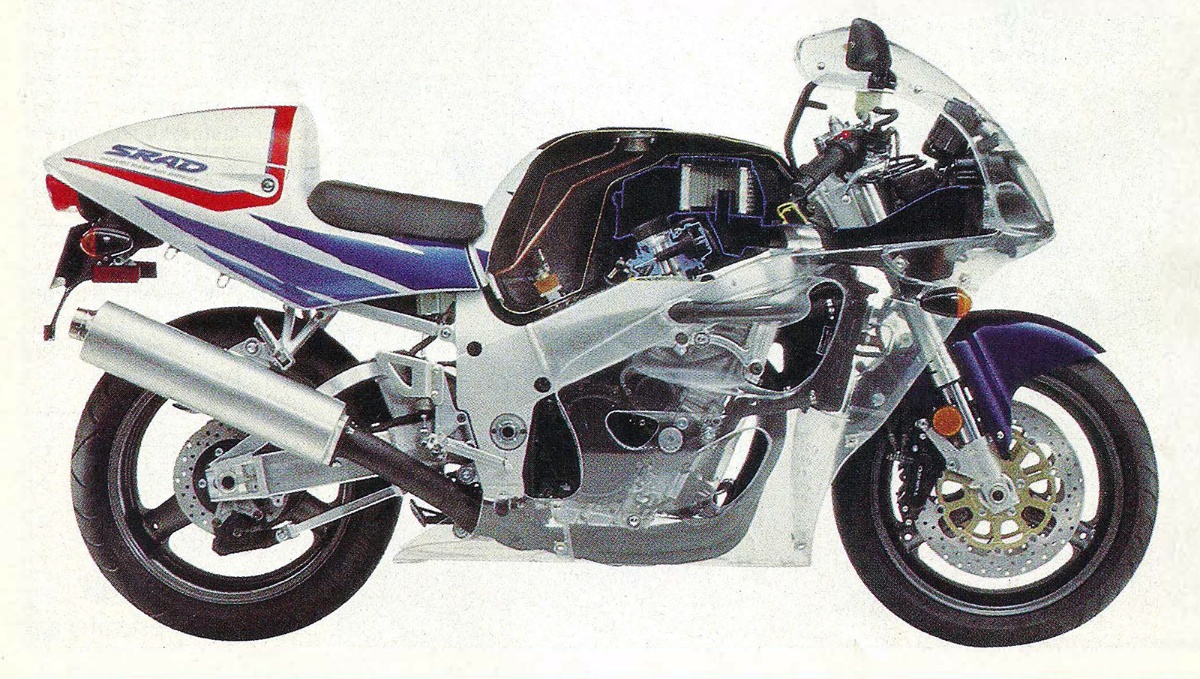 However, this will change next year – thanks to the new GSX-R 750. After a quick weight loss, the Suzuki bike weighs 179 kg, which, together with the 128hp engine, puts it in front of the title of “the strongest motorcycle in the 750 class”. While Suzuki previously adhered to the principle of slow evolution of the model, only the name remains of the old GSX-Ra, It is a completely new motorcycle, built from scratch. Therefore, the rumors about cooperation with Bimota in the construction of superbikes have not been confirmed. 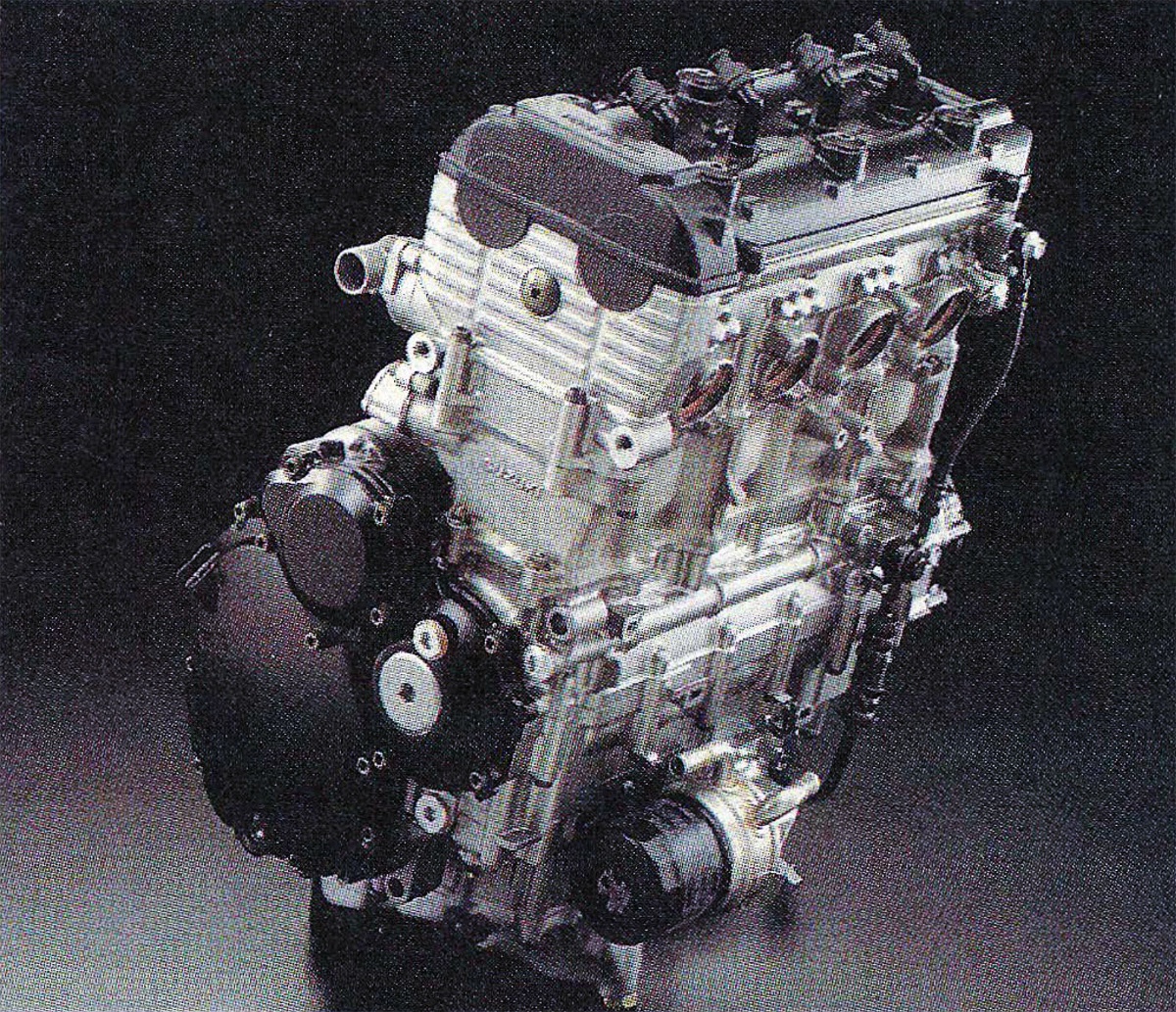 When creating the engine, attention was paid to its complexity. An oil cooler was installed to facilitate the replacement of the oil filter

There were strict requirements for the new motorcycle: it had to be the lightest, most powerful and best-riding bike in its class. A little! Steering is achieved by replicating the wheelbase and steering head angle from the proven RGV. The wheelbase (1,400 mm) is also the smallest in this motorcycle class. It was not easy to fit a 750 cc four-cylinder in the same space as a 500 two-stroke. It required designers to “tighten” the motorcycle assemblies between its axles. 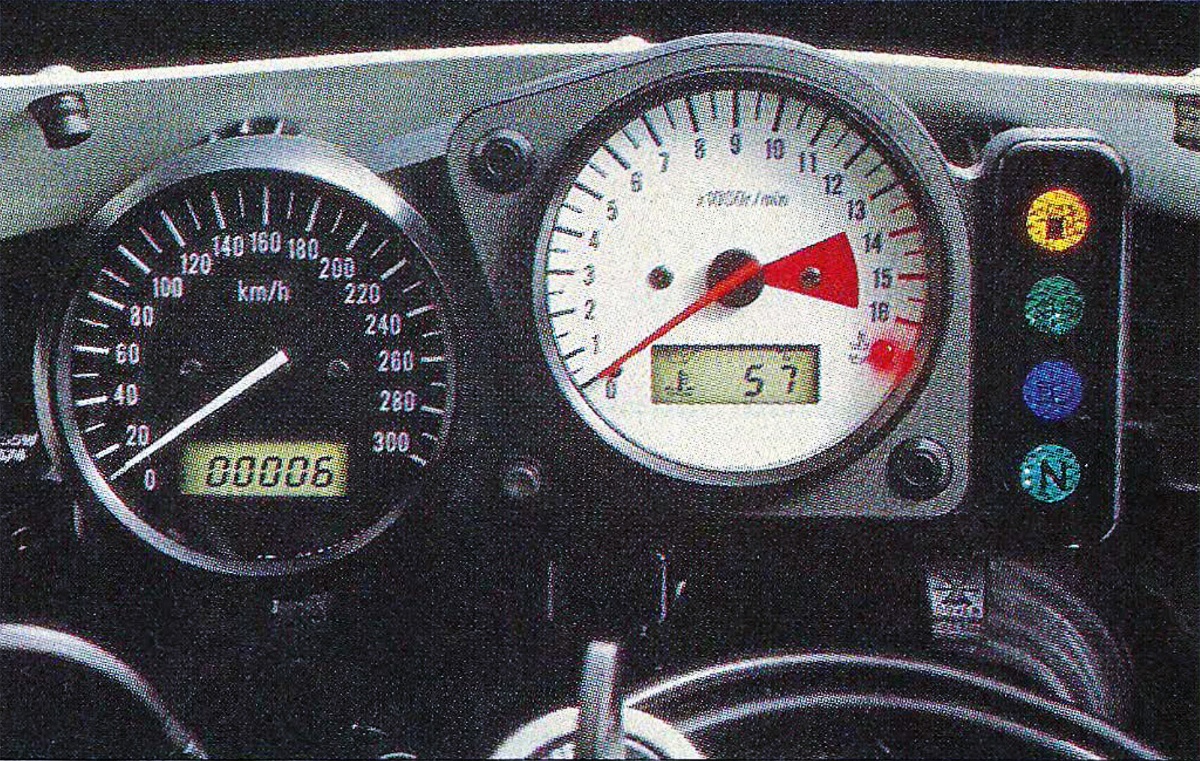 The new engine is smaller than its predecessor. The removal of the sixth prop and a short crankshaft made it possible to reduce the width of the engine by 30 mm. It is shorter than its predecessor (bearing stroke x: 72 x 46 mm), so that the diameter of the valves can be increased more. In the head of sixteen valves, the valves are operated directly by glass tappets. The compact shape of the combustion chamber, very important for the good “bottom” of the engine, was achieved thanks to the small angle (29 °) of the valves. This is followed by an almost vertical, shortened to the lowest absorption channels. 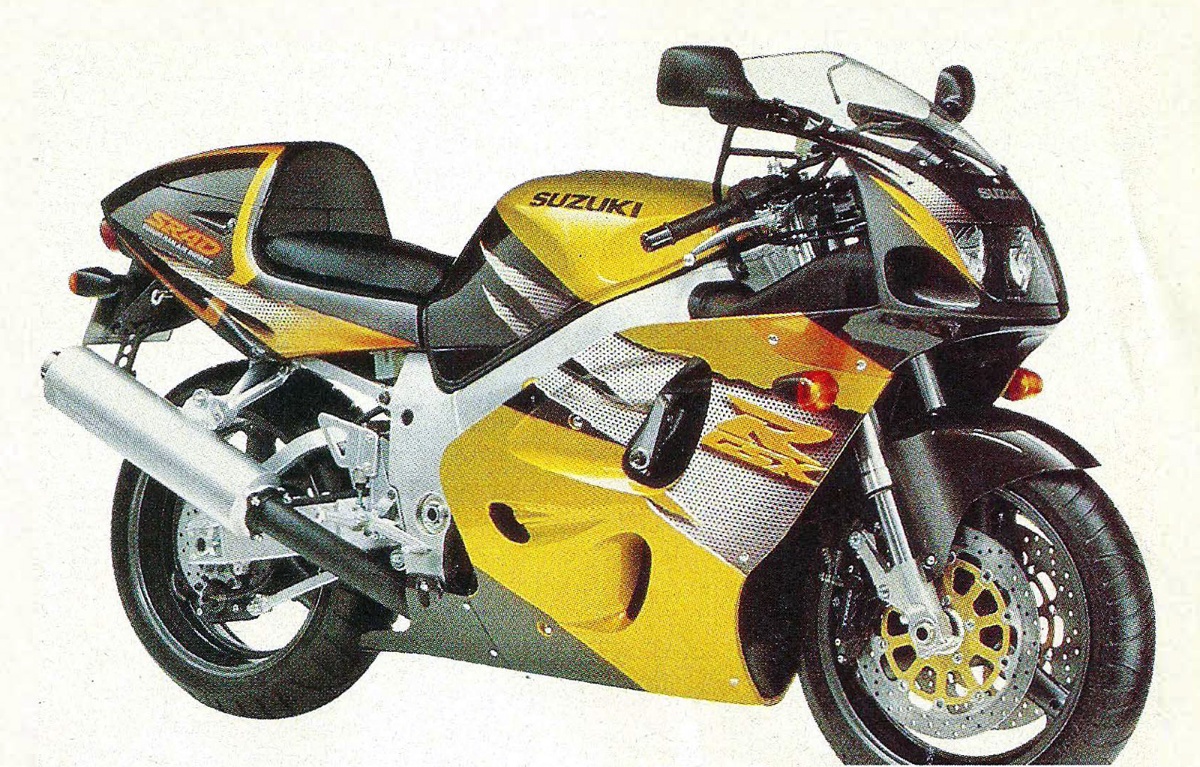 The new engine uses the wind element to improve the engine’s characteristics. SRAD (Suzuki Ram Air Direct Induction) is nothing more than a system to increase engine power at high speed, already known from other motorcycles. On either side of the headlight are two large intakes to force air into the compressed air box. It works with a battery of carburetors with a throat diameter of 39 mm. In the open version, the engine has 128 hp (the same as the Honda CBR 900RR!). 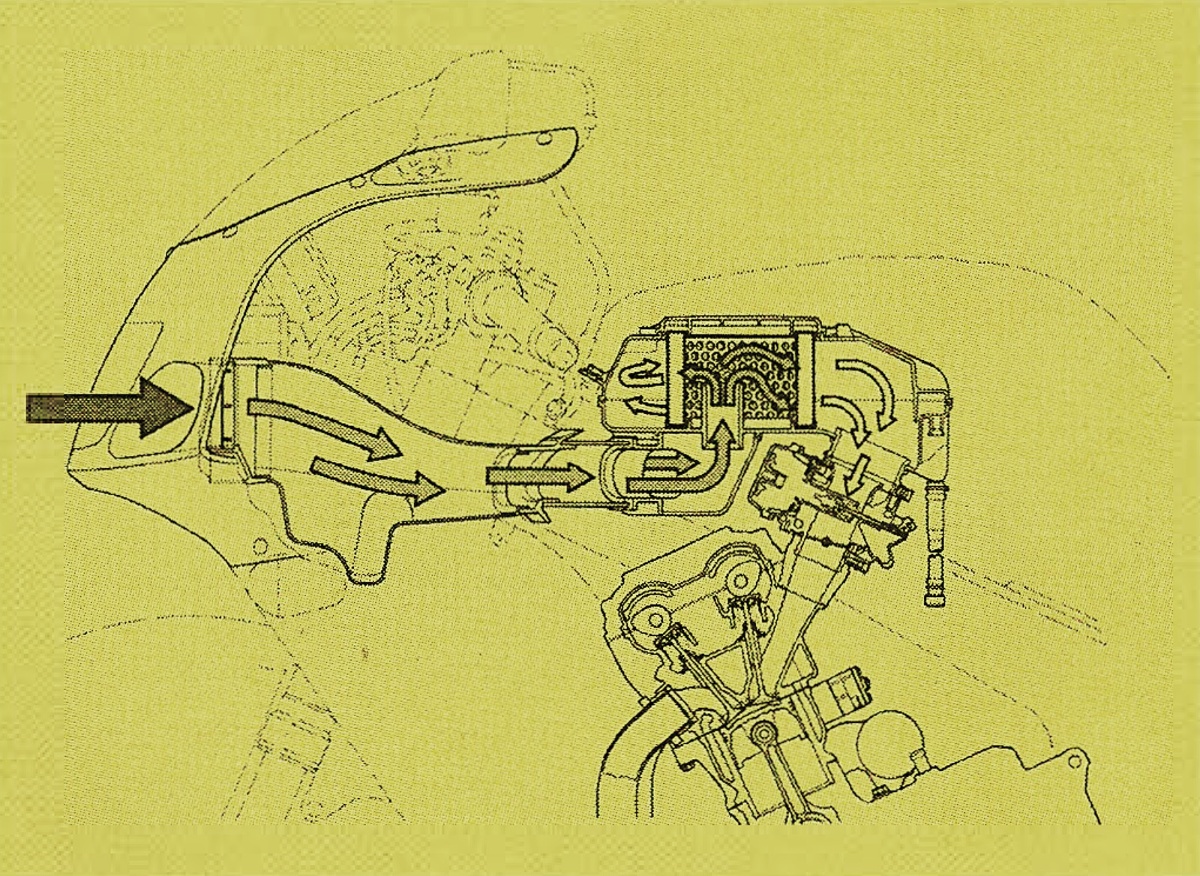 The compact design, as well as the use of many covers of magnesium alloys for casting, allowed to reduce the weight of the engine by 9 kg. The shape of the GSX-R 750 model ’96 is clearly different from what we knew from previous models. The bow-shaped frame, which Suzuki has held for ten years with a stubbornness worthy of good reason, has been replaced by the current open-sided frame made of aluminum, connecting the two nodes of the chassis through a short way: the head. pipe and bearing for rear wishes. The engine, placed under the head of the frame, is also a strengthening element. The front suspension with 43 mm load-bearing tubes and the rear swingarm, which is a large, aerodynamic structure welded from an aluminum profile, allows confident handling of the motorcycle. As befits a sports motorcycle, the suspension is fully adjustable for height, damping and elasticity. 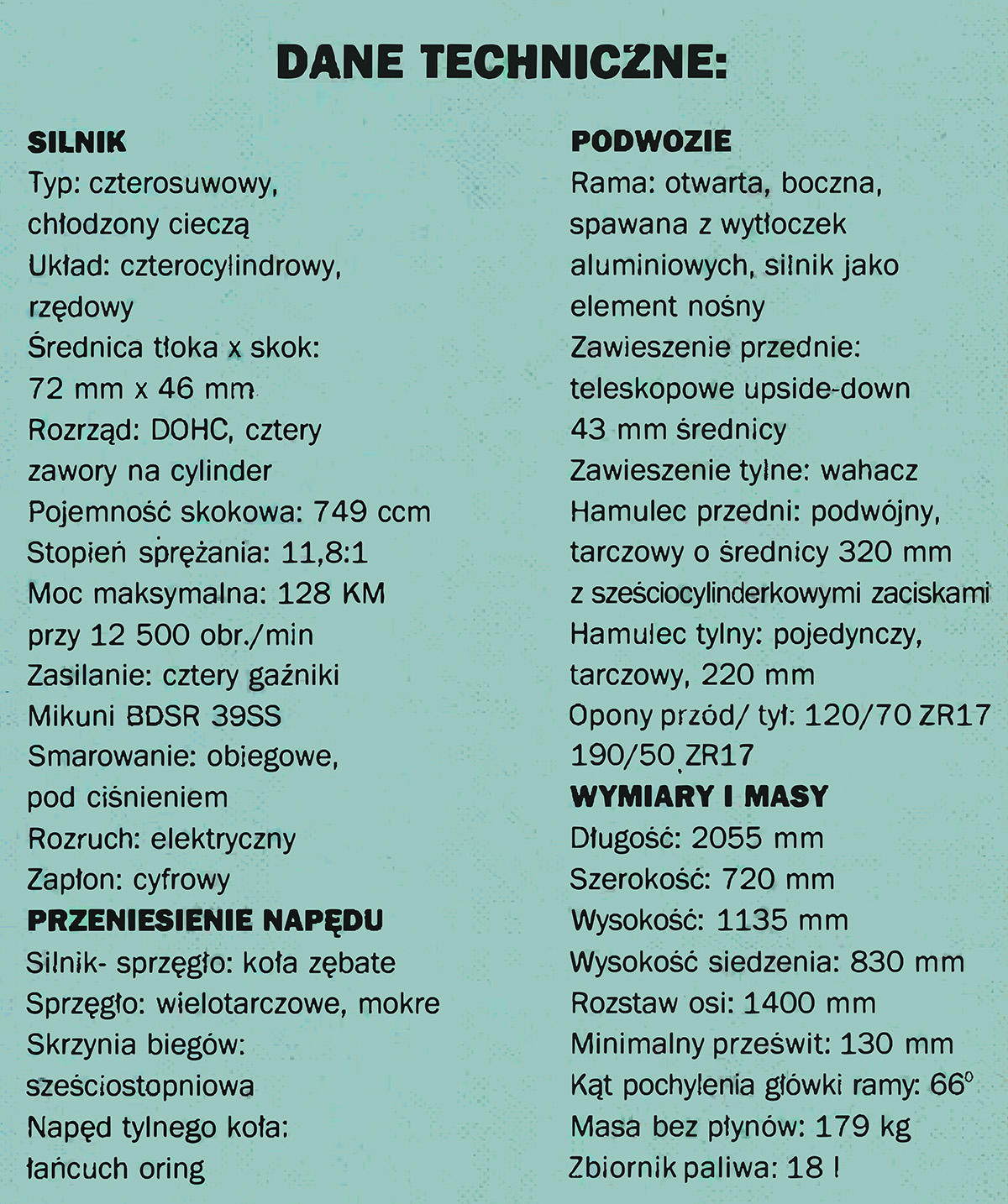 Suzuki designers worked very hard to reduce all the elements of the motorcycle, but they did not neglect such an important thing as aerodynamics. The body of the motorcycle has been carefully cleaned in the wind tunnel, as evidenced by “small things” such as the shape of the front fender, detailing in the lower part of the right, directing the air springs to the sides of the rear wheel and many eye-catching rear fairing, softening the shock on the back of the motorcycle. The fairing can be dismantled and the GSX-R 750 becomes a two-person car.

With a view to compete in the best bike race, a complete set of races has been prepared for next year. With its use, the engine power jumps to 150 HP, thanks to, among others, titanium connecting rods, valves and muffler, forged pistons with a high crown, dry clutch, large carburettor, semi-automatic shifting system and other items many that improve handling, engine power and weight of the motorcycle. How it works in practice – we will see next year (1996, ed.). Another has joined the elite group of superbikes – this time Suzuki. This is how the story of the Suzuki GSX-R 750 has entered the new decade.

Suzuki GSX-S750 for the first motorcycle. Everything in your hands!

FSD does not detect children – testers should delete the video