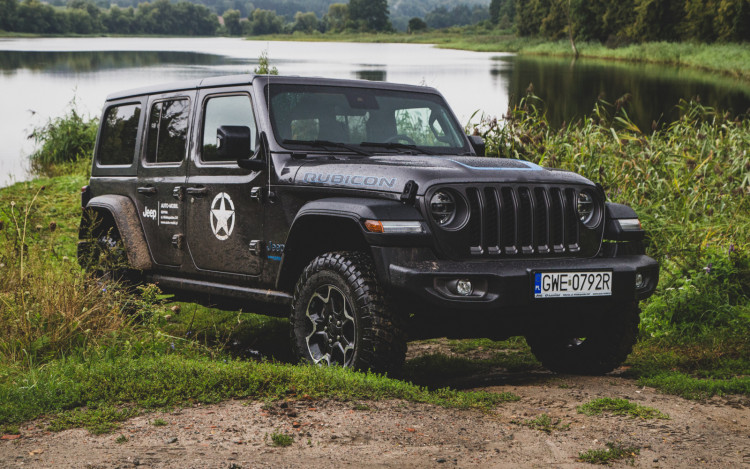 Jeep Wrangler it’s a car story. It’s a model that has been following its – often – unpaved roads consistently for decades. However, a turning point in the history of this iconic car has come. From now on, the amazing off-road vehicle is offered with … an electric hybrid. Meet the Wrangler 4xe, a plug-in hybrid. It really happened. And soon it will be the only power that the Wrangler will be offered with.

Three years ago when I was going through the new generation Jeep Wrangler I wrote: on the fingers of one hand you can count examples of cars that have never succumbed to automotive trends and have remained faithful to tradition for decades. When you say these words, two stories come to mind: the Mercedes-Benz G-Class and of course the Jeep Wrangler.

It’s time to update these words, because the hero of this article is … Wrangler hybrid. Not only that, it has also recently been confirmed that the electric Gelenda will hit the road. It seems that the time when off-road driving will be done by hybrid and electronic means is very close.

Let’s start with the most important, ie the hybrid car. The system consists of a turbocharged 272hp (400Nm) 2-liter gasoline engine and two electric units with a generator function that produces 145hp (245Nm). One of the engines is near the combustion engine, the other is near the gearbox. The total power of the system is 380 hp and 637 Nm of maximum torque. Of course, the Wrangler 4xe offers all-wheel drive – it could not be otherwise. The system is mated to an 8-speed automatic transmission (TorqueFlite). During the tests in the combined cycle (city and highway), the average fuel consumption was about 12 liters of fuel per 100 kilometers.

Jeep Gladiator, or Wrangler with a “pack”

Electric motors gave the Wrangler a nice kick. And this will certainly come in handy in a demanding land. This is because of the maximum torque that is available at low engine revs. Acceleration from 0 to 100 km / h takes only 6.4 seconds. This is a very good result for a car that is 300 kg heavier than its combustion engine counterpart. Now it weighs about 2.5 tons. The maximum speed is 177 km / h (130 km / h in electric mode).

The driver has a choice three ways to drive (Hybrid Mode Selector System). “Hybrid” is the default mode, it combines the torque of the combustion engine and the electric motor. With this option, the drive system will use the battery first, and then add “gasoline” turbo power when the battery reaches a low state of charge.

“Electric” mode is pure electric operation. The 2.0 liter petrol engine kicks in when the driver needs more power thanks to the wide-open throttle. The last, third mode is “e-save”, which gives priority to the gasoline engine. With this option, the battery is stored and recharged while driving.

The hybrid system is also a 96-cell 400-volt battery pack. The battery has a capacity of 17.3 kWh. Thanks to that, we can travel about 40 km in the current alone. The batteries are placed under the second row seats. As I said above, it is because of them Wrangler gained 300 kg of weight. Interestingly, the second row of seats has been redesigned to allow the seat to be moved to access the battery. 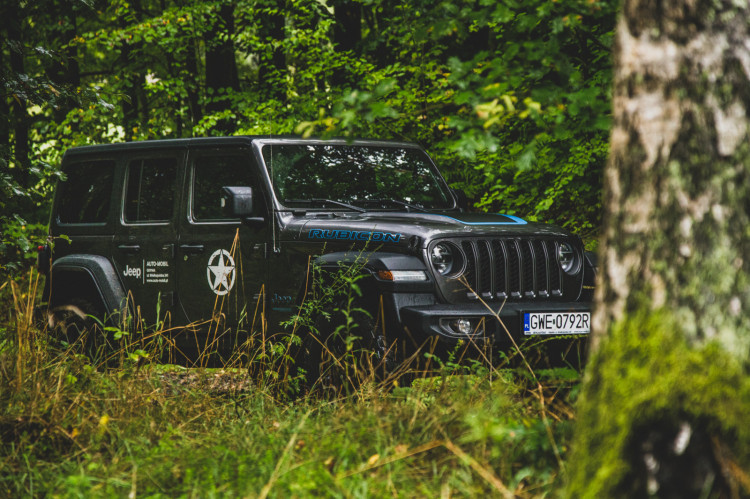 The battery pack is enclosed in an aluminum housing with a special heating and cooling system that maintains a constant temperature, and thus – better performance. Of course, all The electronic system is carefully protected, properly sealed and also waterproof. After all, the Wrangler is a car built for the condition of going backwards and frequently entering the water (wading depth is 76 cm). 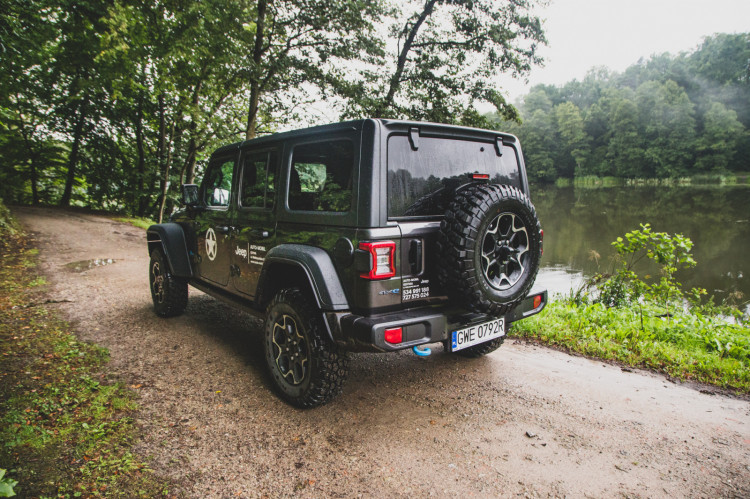 At this point, it is important to mention that the Wrangler 4xe is Trail Rated certified, which confirms that it has passed a series of field tests, on surfaces covered with water, mud and snow, as well as on high-speed climbs.

Above the aforementioned sign, on the driver’s side, there is a charging port, which is equipped with LED indicators that inform about the charging status. An LED battery level monitor is located in the cabinet, above the multimedia screen.

The battery is also charged while driving. It is thanks to the e-Coasting function that the kinetic energy resulting from braking, slowing down or reaching the lights is converted into energy that charges the battery.

In plug-in hybrids, regenerative braking, i.e. a brake that recovers electricity, plays a very important role. In the Wrangler 4xe, when the driver presses the brake pedal, the powertrain control uses the maximum amount of correction available from the electric motors. Of course, the car slows down mainly with the use of traditional brakes. Energy recovery is enhanced when all-wheel drive is engaged.

And how does the Jeep Wrangler 4xe hybrid handle off-road? Without any complexes. The big plus of the 4xe is the torque mentioned above, which is immediately available. This translates into a more precise ride when climbing or crawling.

Built on a frame, the Wrangler 4xe is available in two key versions: Sahara and Rubicon, as well as the 80th Anniversary. The Sahara and Special editions feature a Selec-Trac system with a two-speed transfer case and a 2.72:1 reduction ratio, with a low-slip Trac-Lok rear differential for better traction in difficult conditions (sand, gravel, snow). , ice).

The Rubicon version, on the other hand, has the Rock-Trac system including a two-speed transfer case and a reduction ratio of 4:1as well as the electronic Tru-Lock and rear axle locks. The maximum crawler ratio is 77.2: 1. Additionally, the Rubicon offers high wheel travel. This is due to the electronic anti-roll bar.

An important feature of the equipment is the speed control system and Hill and Hill Climb Control. This is a great convenience for the driver, who can use the gear lever to control the speed when going up and down.

It’s time to price the Wrangler hybrid. Unfortunately, it’s not cheap. Sahara base prices start from PLN 303 500. Rubicon price list starts from PLN 310,400. However, for the 80th Anniversary special edition, you have to pay at least PLN 316,200. The tested sample was valued at PLN 342 thousand. zlotys.

The car was loaned for testing by the company Auto-Mobil from Gdynia.

The first electric Jeep is called the Avenger, with more EVs to follow

Jeep Wrangler Unlimited 4xe Rubicon. Even in hybrid form, the Wrangler is a true commuter