It will be difficult for the myPhone brand to abandon the ladybug image. And after his recent moves, it is clear that he has great ambitions to become one of the most important smartphone players on the Polish market. The Infinity model perfectly reflects the new path chosen by myPhone – a good design, good parameters and a low price should be the key to success, i.e. the hearts and wallets of customers.

I started this text quite boldly, because you can see that a lot has changed in my phone recently. The new logo (below) is not only a cosmetic change, but a related desire to change the perception of customers, i.e. people who are interested in new technologies, but also those who are not very familiar with the world of mobile products.

Infinity on Tabletowo should not be tested at all and I am quite sure that comments will raise an uproar that I am violating the rules that I have set for myself, because Tabletowo is a smartphone from 5 ”up. But when we write reviews and tests of bands and smartwatches (and not news about them), so from time to time we will test small smartphones that you will be interested in. After the comments below entry announcing the upcoming premiere of Infinity It was obvious that many of you have a taste for this style. I’ll try to tell you if it’s worth being interested in. And if it’s as interesting as the paper’s technical parameters suggest.

One more note at the beginning: when private editorial offices received the 3G model for testing, I was able to convince myPhone to rent two versions of Infinity – with 3G (21 Mbps / 5.76 Mbps) and LTE (150 Mbps / 50 Mbps). This is very important, because they differ not only in communication modules, but also in price and selected parameters. The price difference between them is only PLN 50: Infinity 3G costs PLN 849, while Infinity LTE – PLN 899. The cheapest version has eight cores in the form of Mediatek MT6592M 1.4GHz from Mali-450 MP4 and microSD card slot, while one of the most expensive – four cores MT6582 + MT6290M from Mali-400 MP2 and does not have a microSD. In addition, the 3G version is available in two colors (black and white), while LTE – only in white. That’s just an introduction. Let’s move on to the technical specifications and review of the product itself. 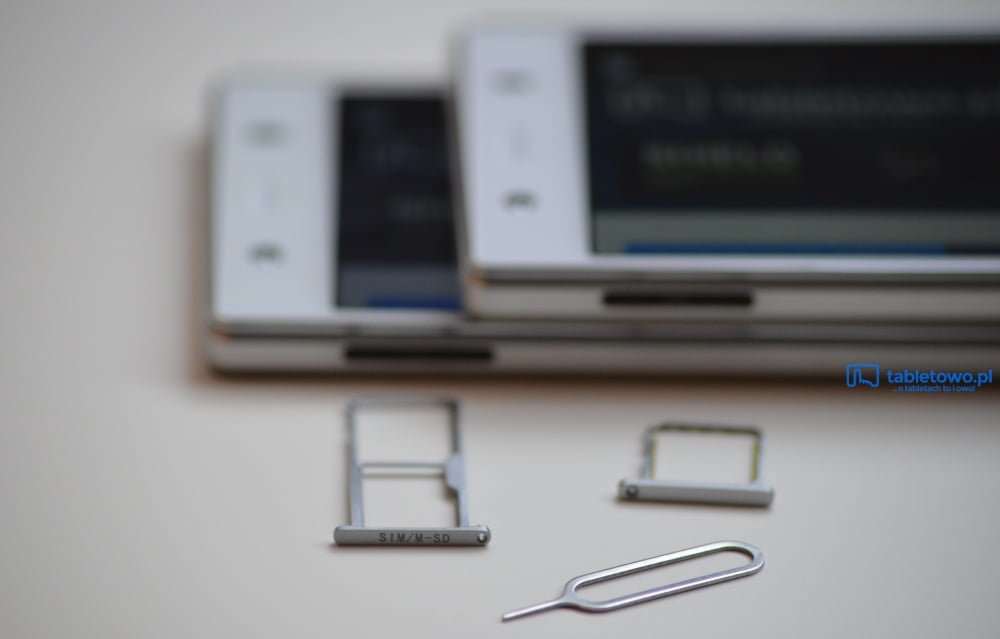 Infinity is a smartphone that attracts attention with its design and excellent workmanship (nothing burns, does not bend, etc.). Taking the device in your hand, it is difficult to conclude that it comes from the wings of myPhone. My testing group is usually made up of friends who are interested in what I’m currently testing, because they’re used to the fact that I keep walking around with different phones. When I showed Infinity to them and said that it is the equipment of this brand, they were very surprised. This is where what I mentioned at the beginning comes into play – myPhone is associated with cheaper hardware. However, it is worth noting that the products offered by this company, especially recently, despite the fact that they are sold in supermarkets, were of good quality and cost less than competing solutions. Infinity is already a space set on one level higher than even Illumination. 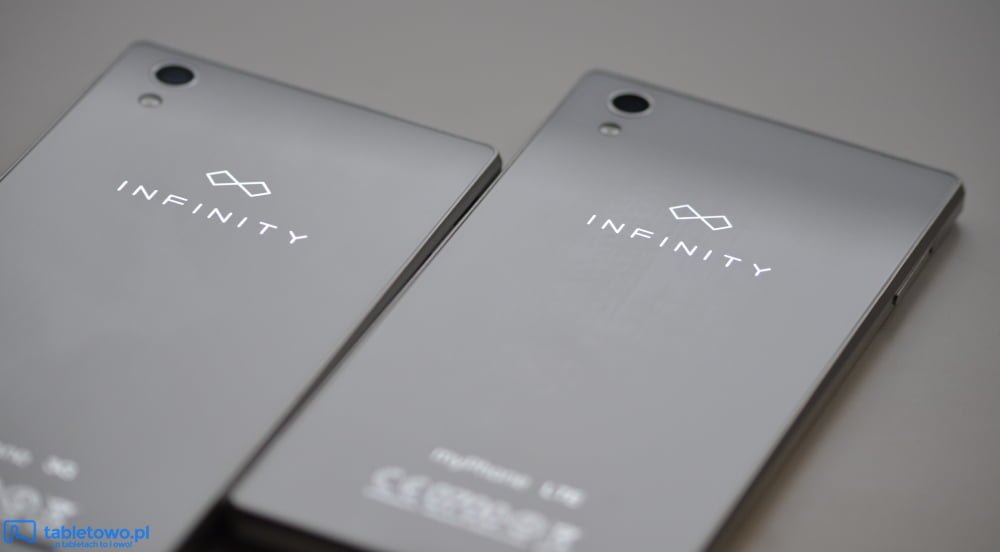 The front panel and back cover are glass (Gorilla Glass 3 front and back). On the sides there is a plastic, silver frame running along the entire length of all the edges, which imitates aluminum from afar (but it is not). Directly in front of the phone there is another frame, thinner and less restrictive, but it adds charm and an elegant cut to the device (probably metal, but I won’t cut my head). What can I say – myPhone Infinity can be loved. In addition, it is small (7.4 mm) and light (133 g).

You can stick to the relatively wide bezels above and below the screen, which adds a bit to this smartphone. Writing these words, I thought that somewhere I had already seen a phone with a similar design. After a while I realized what an example – Huawei P7. Check it out for yourself (same hardware, camera and LED lens placement, same width frames). What? Got inspired by myPhone Infinity? 🙂 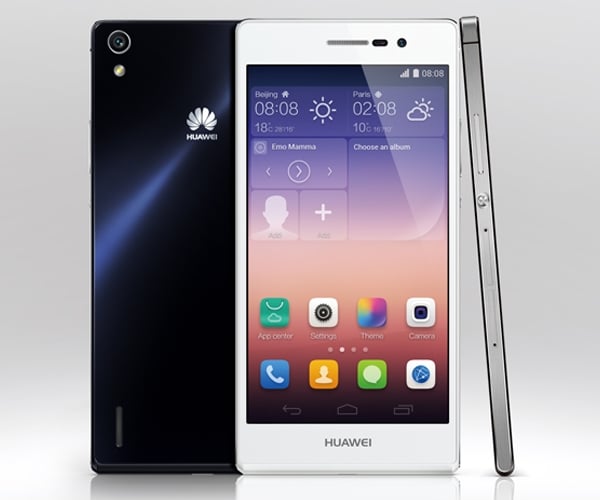 With all this, you also need to remember that the back of the phone, due to the glass surface used, is slippery, which makes it slip from any surface that we put it on (especially pants). 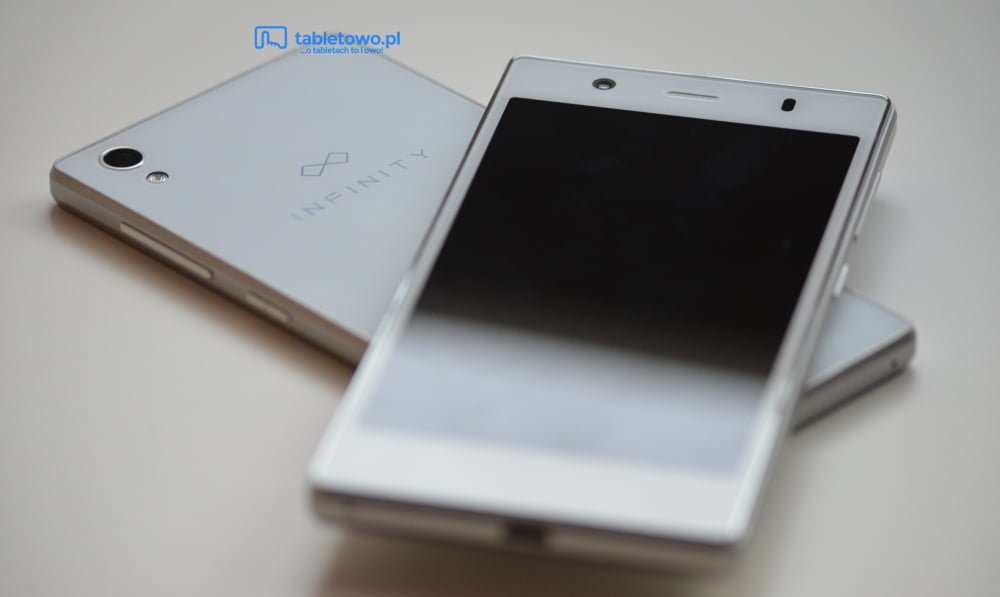 I do not hide that in all types of cheap phones, I am very afraid of my communication with the display, which most likely I will have to make a big mistake. In the case of the Infinity, the screen makes a good first impression.

Let’s start with the most important – the resolution of 1280 x 720 pixels on the 4.7 “diagonal is 312 pixels per inch (ppi). This value is more than enough for the comfortable use of smartphones every day – reading websites, viewing PDFs, playing and using other types of multimedia. The implementation of a matrix with a higher resolution can have an impact on the performance of the phone and its working time, and HD 4.7 “can not be wrong. Especially at this price and with these parameters.

In myPhone Infinity we are dealing with an IPS OGS matrix covered by Gorilla Glass 3. It can be seen that we have the same matrix in both versions of the tested phone. Yes and no. It turns out that while they look the same on paper, in reality, you can see a big difference – that’s one reason why I’m glad that I could test both variants of the smartphone at the same time.

Well, color reproduction differs – in the LTE version, white looks better, while black (and its depth) is lame. In the 3G product we have excellent black and its depth, but also “dirty” white. See how it looks straight ahead, but also from different angles (photos don’t fully show the real difference). On the left, the version with 3G, on the right – LTE:

Another issue is screen brightness. In the LTE version, it is higher – 86 nits minimum, 450 nits maximum, while in the 3G version, it is 395 nits and 50 nits, respectively. High brightness (especially in the model with LTE, in 3G a little weak) makes the use in sunlight almost without problems (with great, of course). On the other hand, we have a very high brightness that defeats the eyes when we use the phone at night. In theory, you can use the solution with Screen Dimmer software, but this is only a temporary solution that will not suit everyone (I am a perfect example of such a person). It is also possible to automatically set the brightness of the screen depending on the lighting, but I got the impression that the sensor does not want to cooperate with the user – in most cases it does not change the brightness when needed.

Both screens are sensitive, I have no objection to the touch response. 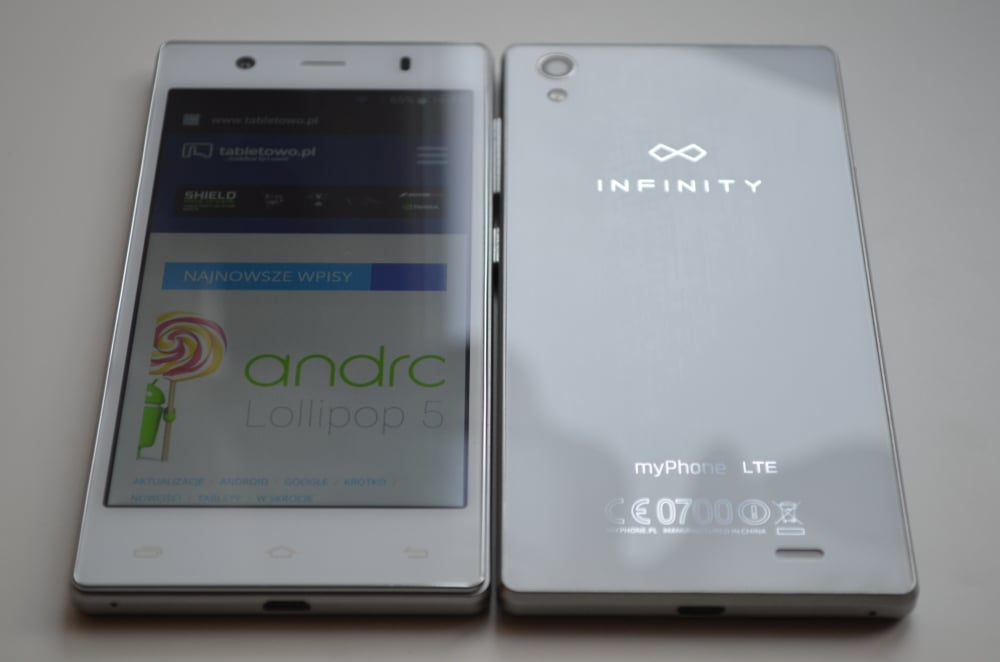 MyPhone Infinity review and comparison of 3G and LTE versions. myPhone jumps to the top shelf

MyPhone Infinity review and comparison of 3G and LTE versions. myPhone jumps to the top shelf

5 things you need to know about “Avengers: Infinity Wars”

A look at the BMW model

Fast Android with a dim screen

Three types of cutouts on the screens of Samsung smartphones

Ford Mustang. Petrol or electricity? You can always adjust to your lifestyle