An independent international panel of 102 experts from 33 countries selected the IONIQ 5 as the winner. In the final of the World Car Awards, the electric Hyundai beat 28 competitors, divided into different categories. Thanks to its classic design, smart technology and performance, the very first model of the new Hyundai brand, the IONIQ, has become a top seller in Europe. Hyundai has never won as many awards as the IONIQ 5. Since its launch in 2021, the electric Hyundai has been named car of the year in several countries. 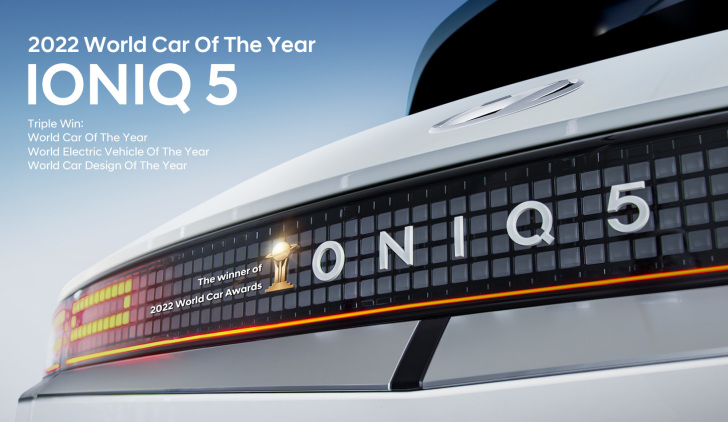 The IONIQ 5 is available with a choice of two battery packs (58 and 77.4 kWh) and rear-wheel or four-wheel drive. There are four versions in total: Style, Connect, Connect+ and Living Room. In the standard version of the Style, the IONIQ 5 (with a 58 kWh battery) is already well equipped, including 19-inch alloy wheels, privacy glass and a 12.3-inch Multimedia screen with navigation.

The IONIQ 5 uses the Electric-Global Modular Platform (e-GMP) designed specifically for battery-electric vehicles (BEV) like the IONIQ 5. It offers significant benefits in terms of performance, safety and space. Thanks to the 800V system, the IONIQ 5 charges very quickly. Within five minutes, its driving range increases by 100 km.

“We are very honored to receive these prestigious awards. It is a recognition of the talent and hard work of all our people at Hyundai.” Said Jaehoon Chang, President and CEO of Hyundai Motor Company.
‘We would like to give importance to our vision of Future Human Development in every possible way and the success of IONIQ 5 certainly contributes to this. This vehicle has attracted a lot of attention from environmentally conscious consumers around the world and will accelerate the electrification of the automotive industry.

In the coming years, Hyundai will introduce two more electric models under the IONIQ brand: IONIQ 6 and IONIQ 7. The IONIQ 6 is an electric sports sedan based on the Hyundai Concept EV Prophecy. The IONIQ 7 is a large electric SUV, which was presented as a research prototype called SEVEN at AutoMobility LA in Los Angeles last year.

Revealed: Hyundai IONIQ 6 – An electric vehicle that improves the condition of the ground

Why does your heart skip a beat when you see this Hyundai Ioniq 5 N. But your stomach is not beating …

Hyundai Ioniq 5 in test: A promise for the future

10 things I saw in the Hyundai IONIQ 5 review

In Saxony, the price of modern new cars has been significantly reduced

Hyundai IONIQ 6: “one of the most energy efficient electric vehicles”

A little Porsche with 4 doors, right?