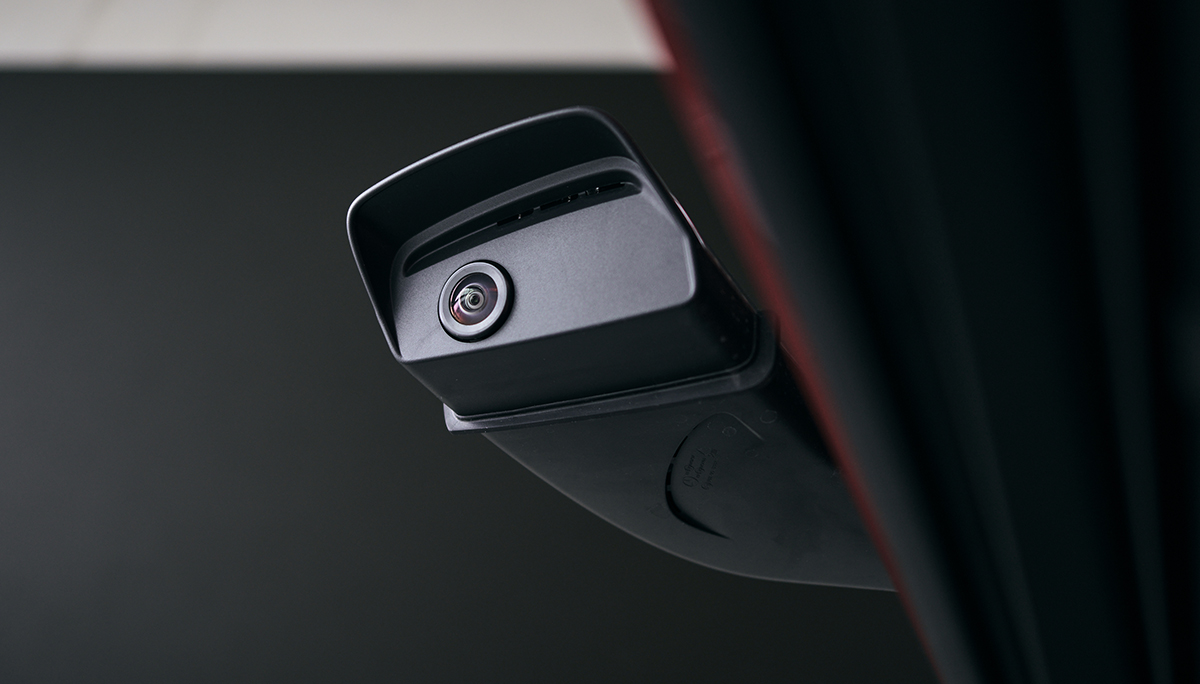 MUNICH – Mercedes-Benz trucks have already introduced a truck and camera instead of outdoor mirrors in 2014 with its study ‘Mercedes-Benz Future Truck 2025’. In 2018, the manufacturer was the first in the industry to launch the production of the MirrorCam series, the first glass camera system for trucks. The MirrorCam series truck does not have the usual main and wide angle mirrors but a system consisting of two cameras on the left and right side of the roof frame and two image display displays on the A columns in the cab, as well as the corresponding. controls.

The conscious choice was made for two large 15-inch displays on the driver and co-driver side. Because the image of a moving object is large, it is easy to judge its speed. To ensure that the driver could identify the details of the situation related to the situation as quickly as possible, the complex display of multiple quarters was replaced by one simple display.

Mercedes-Benz Trucks have now updated MirrorCam for the first time: For the second generation, which will be available for Actros, Arocs and eActros since April 2022, Mercedes-Benz Trucks have developed the most important details of winning multiple invention awards. system. “The close exchange of our clients and their daily experiences formed our basis for further refining the technical parameters of the individual to create a higher value, especially in the field of exhibition and security”, says Prof. Be Baake, Head of Department. Product Development Mercedes-Benz Trucks.

In addition to improving aerodynamics and thus reducing fuel consumption or lower energy consumption, MirrorCam has specifically ensured road safety. Because where the mirrors previously hid large areas to the right and left of the A columns, the driver has a clear view thanks to MirrorCam. This is especially beneficial at intersections, during maneuvers and in tight bends. Additionally, the electronic system presents challenges for operational tasks through performance such as trailer tracking or special displays that assist professional drivers in their daily work.

From the outside, the second-generation MirrorCam immediately detects that the camera equipment is shortened by 10 cm on both sides. This applies to thin and wide taxis and has the advantage, among other things, that drivers can easily back down in a straight line compared to the first-generation MirrorCam. This is due to the fact that the MirrorCam view is now more similar to that of conventional door mirrors. Short arms also have the advantage that the camera arm on a 2500 mm wide cab now does not protrude beyond the molding glass that is clearly visible to the drivers. Collisions with objects along the road are now almost impossible. Thanks to the same width of the chassis, this also applies to a variant of width 2300 mm.

As part of a camera-based system update, Mercedes-Benz Trucks have also worked on other tasks. For example, a drip line is installed on the bottom of the MirrorCam to prevent rainwater from flowing into the lens and causing unwanted eye effects. Dirty mirrors, which in the worst case scenario can be viewed through dirty side windows, are also a thing of the past with MirrorCam. 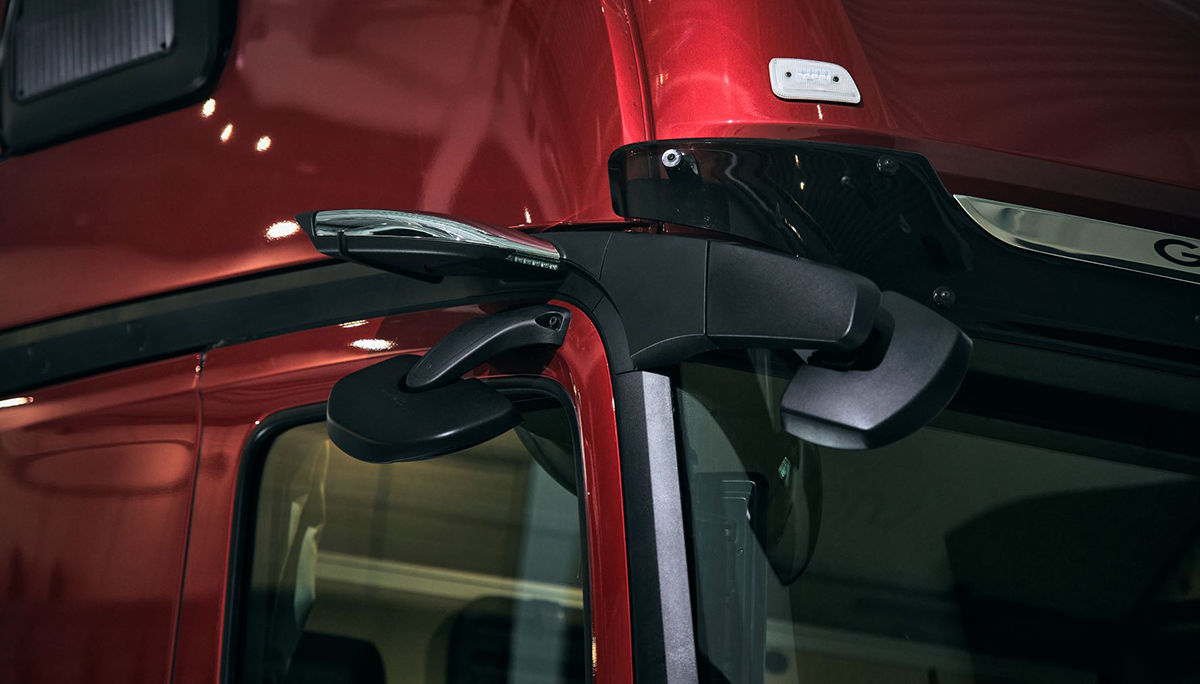 In addition, Mercedes-Benz Truck engineers have further refined the sound mapping – “setting the tone map” is a process of resizing images so that a large number of tones are accurately rendered on average – which is now particularly noticeable in the improved contrast display. Adjusting the color and brightness of the already illuminated camera system means that the displays show the location corresponding to the driving conditions more accurately, for example when reversing in a dark or dim light.

Focus on driver safety and comfort

For all that, the update implemented results in the highest value of MirrorCam. Thanks to its auxiliary effect, a more advanced system can help control conditions such as overcrowding, driving, driving without looking bad and in the dark, twisting and narrow paths more safely and without stress. Existing benefits are still available, such as rear-angle mode, distance lines on the display to better estimate the distance of objects in the back of the car, rotate the camera image while reversing or monitor the car’s position at rest. 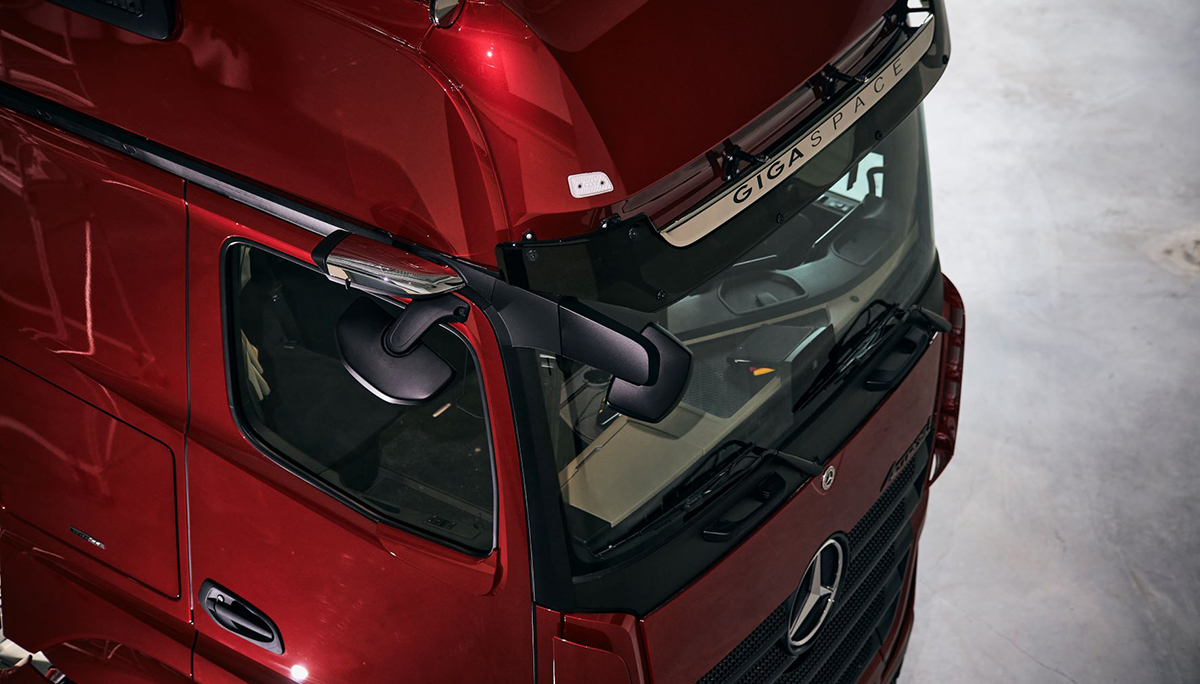 The interaction between MirrorCam and Sideguard Assist peripheral from Mercedes Benz Trucks has already manifested itself, especially in difficult traffic situations and at mysterious intersections. If there is a risk that the truck driver will not see the cyclist or pedestrian turning to the right, the system may interfere with its system’s limits, alert the driver using a multi-step process and, at the discretion of Active Sideguard Assist, autonomous. brakes up to a speed of 20 km / h. Sideguard Assist continues to use the MirrorCam display for visual notifications.