Introducing the Renault Espace (2023), a highly-anticipated sixth-generation magnificent SUV derived from the Austral, boasting the ability to seat up to seven passengers. Get ready to feast your eyes on the first official images and information. Renault will unveil its latest and greatest addition to its SUV lineup in March 2023.

After four decades of innovation and evolution, the Renault Espace saga continues with the highly-anticipated release of the 6th generation model. This sleek and modern vehicle boasts cutting-edge technology, advanced safety features, and a refined design that is sure to turn heads.

Renault Espace (2023): From Australia to Space

The Renault Espace is set to make a grand entrance, built on the cutting-edge Renault-Nissan Alliance‘s CMF-CD modular platform. Its technical prowess is matched by its sleek design, featuring an elongated variant of the Austral with an added 20 cm of length distributed between its wheelbase and rear overhang.

This versatile vehicle will offer five or seven seats, making it perfect for growing families or groups of friends. Its front face will mirror that of the Austral, with the exception of its grille, while its rear will boast a more angular and vertical tailgate, reminiscent of the elegant differences between the current Peugeot 3008 and 5008, designed under the expert guidance of Gilles Vidal, who has been leading Renault’s styling since the end of 2020.

Renault Espace (2023): A name that goes back to the disco

The upcoming Espace and Renault Austral are truly a match made in heaven, as the brand’s latest announcement video confirms. As the video unveils the rear lights of the future model, we can’t help but notice the striking resemblance to the diamond SUVs. As we gaze upon the sleek design, the sound of a disco-inspired cover of Chic’s “Spacer” featuring Sheila sets the tone. It’s as if the Espace and Renault Austral were meant to be together, like a disco ball twirling on the dance floor.

SUV on the CMF-CD platform

The new Espace is a mystery wrapped in an enigma, with Renault keeping details of its technical specifications under wraps. All we know is that it will feature the cutting-edge CMF-CD platform, the backbone of the Renault-Nissan-Mitsubishi alliance. This powerful modular construction kit has already proven its worth in a number of vehicles, including the sleek and stylish SUV Renault Austral, the dynamic and versatile Nissan Qashqai and X-Trail, and the rugged and reliable Mitsubishi Outlander. With this advanced platform as its foundation, the new Espace promises to be a comfortable, innovative, and high-quality vehicle that will stand the test of time.

The CMF-CD platform beckons with endless possibilities, from the gentle purr of a hybridized petrol engine to the robust rumble of a classic diesel, and even the electrifying thrill of a full or plug-in hybrid train. The excitement builds as we ponder which specific versions of these powerful drives will be chosen to power our vehicles. The Austral comes equipped with a 140 horsepower mild hybrid petrol engine, but for larger cars, we may see a boost in power with the 158 horsepower mild hybrid or the full hybrid with a whopping 200 horsepower. The future of transportation is looking bright and thrilling with the CMF-CD platform at the helm.

In the year 1980, the world was on the brink of a revolutionary new concept in car design – the Renault Espace. Four years before its official debut, the Espace was already making waves in the automotive industry with its unique name. A name that has stood the test of time, and has now been synonymous with innovation and comfort for a staggering forty years.

According to Sylvia dos Santos, nomenclature manager at Renault, “Space is a captivating word that resonates with people in many languages. Its soft sound and harmonious phonetics immediately evoke feelings of comfort, luxury, and cutting-edge technology.” The Espace was designed to be a generous, comfortable, and technologically advanced vehicle, and it lived up to its name. The Renault Espace was a game-changer in the automotive world, and its legacy lives on to this day. 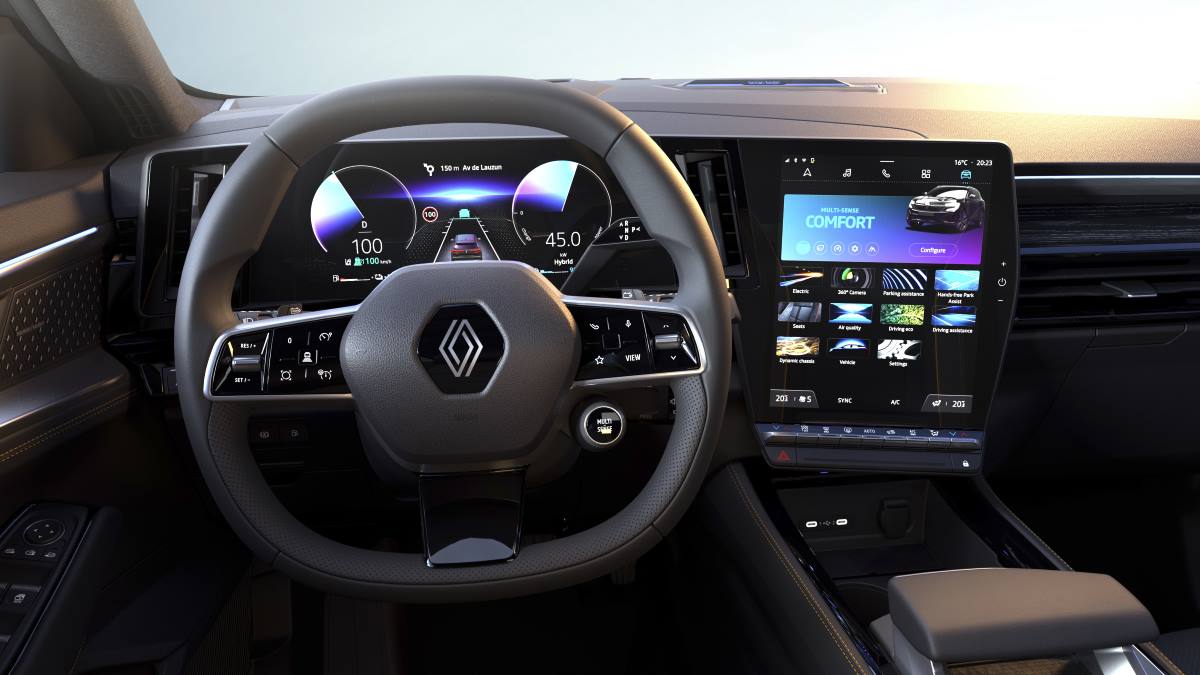 The new Renault Espace Release date is scheduled for March 2023

The future Renault Espace will be a shining example of innovation and progress, as it will be powered by the cutting-edge engines of the Austral. With its micro-hybrid and hybrid units, this sleek and stylish vehicle will be a true leader in the world of electrification. The golden color of the “E” that sits proudly in the center of the tailgate is a clear indication of the advanced technology that lies within. Prepare to be amazed as the new Renault Espace makes its grand debut in March 2023, and hits the roads next summer, ready to take you on a journey of a lifetime.

As the curtains close on the final act of the Espace’s production, Renault bid farewell to a pioneering minivan that has been a staple on the roads for decades. Though the Espace may no longer be available in France, it will continue to be cherished by those who have been lucky enough to own one in certain markets. However, come the end of March, Renault will officially retire the minivan from its line-up, signaling the end of an era for the automaker who, alongside Chrysler, introduced the Voyager in 1983 in the United States.

Also as a PHEV or with diesel?

The Renault Megane and the new Mitsubishi Outlander PHEV are shining examples of the capabilities of the CMF-CD kit. These plug-in hybrids are proving to be a game-changer in the world of automobiles, with the Mitsubishi Outlander PHEV being exclusively available in the USA for now. The Renault Koleos also utilizes the same platform and boasts a powerful 183 hp diesel engine, making it a force to be reckoned with on the road. The Espace, a discontinued model, also boasts a diesel engine with 189 hp, but it remains to be seen if it will be able to stand up to the competition in the diesel engine market.

When it comes to design, the Austral and the Arkana SUV coupe should set the bar high, and the new Espace should follow suit. The Espace should make a bold statement with its large Renault rhombus in the radiator grille, giving it a distinct and striking appearance. The headlights, as low as they are wide, should form a frame around the daytime running lights, extending far into the front apron, creating a sleek and modern look. To add to its ruggedness, solid-looking plastic elements on the wheel arches, a hint of underride protection at the front and rear, and a steeply sloping rear end to accommodate the third row of seats should be incorporated. The new Espace should be a true masterpiece of design.

Renault announces the return of Espace, it becomes an electric SUV with 5 or 7 seats

Renault will convert another minivan into an SUV this year

Renault Espace 6 on the starting blocks

The new Renault Espace is coming in March [Autokiste]

A contender for SUV of the year, this is the most requested car right now