VIDEO / TESTAfter years of attention-grabbing and promising research models, Volkswagen has finally pulled the curtain on the ID.Buzz. The ‘Hippie bus’ in 2022 is fully electric and clearly refers to the first Transporter (T1) from the 1950s. The vehicle has a rich history.

The Volkswagen bus was immediately taken over by the Dutchman Ben Pon, who gave the car maker a simple sketch. His painting is now part of the permanent collection of the Rijksmuseum. The Pon concept, a very compact delivery vehicle with a rear engine, became a worldwide icon. In the 1960s, VW was famous for the hippie movement, which created strong scenes of flowers in bright colors. But for decades he was also a stable horse for the milkman, construction workers, PTT and the police.

The Transporter is now in its sixth generation and in recent decades was sold as a diesel. But in 2022, diesel was phased out, so VW had to come up with an environmentally friendly car solution. Moreover, the manufacturer has been playing with the idea for many years that with the right feeling – a combination of hip and retro design – then the popular can become hype again. It seems like the right time: the classic VW bus is currently very popular, also with enthusiasts who use it as a camper or a food truck.

More than twenty years ago, Volkswagen already showed a prototype of the new model VW Bus. Several times enthusiasts were happy with a dead sparrow, because every promising car that hinted at the modern ‘Hippie bus’ repeatedly disappeared from the refrigerator. But now ID.Buzz has been launched, which will actually go into production later this year.

On the one hand, the 4.71 meter long ID.Buzz will be launched in the market as a fully electric passenger car. The versions to be launched this year all have five seats, but an extended variant will also appear later that can accommodate six or seven people if desired. In all cases, you get a battery bus with two rear doors and a large cargo space: even with five people it can carry more than 1100 liters, when you fold the rear seats, the volume increases to more than 2205. liters.

Volkswagen also presents a van version, which is called the ID.Buzz Cargo. The ‘Bulli’ variant (as the Germans specifically call the Transporter, a combination of ‘Bus’ and ‘Lieferwagen’) can be immediately seen as an electric alternative to the ‘regular’ petrol-engined Transporter, which is still available. as usual. The Cargo has one sliding door as standard, a second is available as an option. Like two tailgates, if you don’t get a big tailgate. In the single cabin of this version, VW can fit two or three seats as you wish, while objects over 2.20 meters long find space in the cargo area.

The amount of luggage space is 3.9 cubic meters, while the load capacity is at least 600 kg – plus 100 kg on the possible roof rack. Volkswagen are quick to emphasize that two Euro pallets can fit into the Cargo one after the other. A standard pallet is 1.20 meters wide, the distance between the rear wheel arches is 1.23 meters. If you like, you can have an ID.

It’s surprising: the cargo floor is much higher than a ‘normal’ car, despite the battery and engine being under the floor. It appeals to entrepreneurs who often have to be in tight city centers: the circumference of the car is more than 11 meters, which is very small for a long car and compared to the current Volkswagen Golf.

Always the motorcycle behind

Every ID.Buzz gets the engine between the rear wheels. Like the first three generations of the Transporter, although the latest generation does not want petrol or diesel, but electricity. At the moment, the electric motor has a standard power of 150 kilowatts (or 204 hp), but VW already promises that versions will come with a second motor between the front wheels. So it gets – in addition to more power – also a four-wheel drive, as you can choose with the ID.4 and ID.5.

Under the skin, the Buzz has a lot in common with other flagship models from Volkswagen. Although you can order battery packs of different sizes in the ID.3, 4 and 5, VW only offers the largest pack in the ID.Buzz with a usable capacity of 77 kilowatt hours. It is expected that the extended versions will have more battery cells on board, there are rumors of variants with more than 100 kilowatt hours. Volkswagen will reveal the power and performance of those versions later. Versions with 77 kWh come with a single battery charge, Volkswagen has not yet revealed, but the test model we drove (see the video with this story) should be able to reach around 400 km. It’s also worth noting: to make sure you don’t overclock your power supply too quickly, ID. The Buzz is electronically limited to 145 km/h.

By default, the ID.Buzz can charge at 11 kilowatts at a public charging point. At this time, fast charging is possible with a maximum of 170 kilowatts, with which you can increase the percentage of the battery – at least according to VW – from 5 to 80 percent in half an hour. Future software updates, which Volkswagen can implement wirelessly, should increase charging speeds further in the future.

It is interesting that the ID.Buzz is prepared for the so-called ‘two-way charging’: with this the car can, for example, provide energy for your home when the energy grid needs help. It is not possible to charge other devices through the charging port (such as the Hyundai Ioniq 5), but VW hides a 230-volt power outlet inside. With Luggage, it is surprisingly enough between the front seats, instead of in the luggage compartment. According to Volkswagen, this is because, for example, handymen prefer to charge their tools within reach and not leave them lying around in the cargo area.

The interior of the ID.Buzz has two characters: in the Cargo you get a lot of black, strong plastics and lots of storage space. That stays the same and is very convenient if you have to go to and from your day job. For passenger car versions you can choose a more frivolous decoration: there is a white interior with yellow or orange details, which are implemented even on the dashboard. In addition, the wooden panels attract attention and VW reports that the leather upholstery is no longer available: instead of parts of the seat upholstery, the carpet and the headrest are made from recycled products.

In various areas in the interior, Volkswagen is quite enthusiastic and happy details. For example, you see small pictures of the car in various plastic panels, small identification. Buzz is ‘hiding’ in the ‘rain’ on the edge of the side windows and ID. Buzz sprays winking smiles on door handles, among other things. It should be your taste, but at least not boring. Paint kits are also available at an additional cost, as is the case with two-color painting.

The new Volkswagen ID.Buzz and ID.Buzz Cargo should be available to Dutch dealers in October. The importer will announce the price that the different versions will cost around May this year. In the summer, the car is already visiting Dutch dealers for the first friends and potential buyers. The fully-trimmed version of the passenger version is expected to cost more than the compact ID.4 in comparable form; in that case you are probably talking about a car that should easily give sixty thousand euros. The starting prices will of course be very low, but they will follow during the introduction of the market.

Check out our automotive and mobility videos below:

Volkswagen celebrates the world premiere of the electric Bullis ID.buzzing 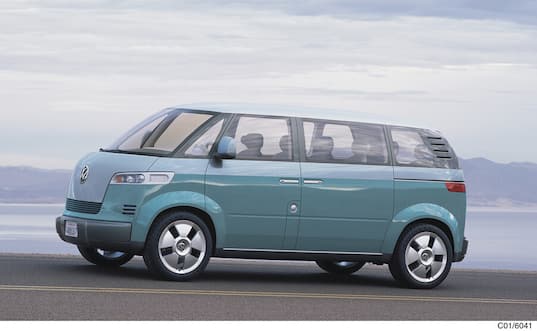 How VW designers created the brand. they have raised the buzz

These are iPhone 14 Pro alternatives that are just as expensive

Volkswagen ID.Buzz is already in Poland. We saw him live

Mercedes T-Class – for those who love life!

New Lotus – PREMIERE, what a model

Porsche is setting up a subsidiary in Norway