Lexus has completely redesigned the RX, a pioneering luxury SUV in its segment. The carefully studied evolution of the model from the high-end house of Toyota is characterized by technology and design to increase performance and improve comfort and clarity of dialogue between the car and the driver.

The fifth generation of RX available in Europe with a variety of three different electric trains. On sale since March, the heart of the offer is the RX 450h+, the first RX to use Lexus hybrid technology. The hybrid-electric RX 350h is positioned as an excellent alternative to smaller displacement diesel and gasoline engines. For customers looking for fun performance, Lexus introduces the RX 500h, its first performance-oriented turbo hybrid featuring the DIRECT4 power management system.

RX 350 available also in F SPORT version, with the RX 500h being introduced as the only F SPORT + model, with additional performance engineering features.

An important feature of the “Next Chapter” of Lexus – the new chapter of the design of the Japanese manufacturer – is the creation of a natural relationship between the driver and the car, a dialogue in which the car responds exactly as the driver intends and that the driver feels. comfortable and in control. This is the Lexus Driving Signature, the hallmark performance of all new Lexus models.

In RX adopted The Global Design Platform of the Lexus GA-K is the basis of a low center of gravity, improved climate, weight reduction (up to 90 kg compared to the current model) and increased body rigidity, elements that play a central role in to take performance that evolves to the next level.

Engine. RX 500h. The RX 500h marks a breakthrough in hybrid electric technology that sets it apart from any previous hybrid model. The RX 500h uses a new parallel hybrid architecture, which includes a 2.4-liter turbocharged gasoline engine with a six-speed gearbox, a front-mounted power steering unit, a hybrid battery, and a 76kW rear axle. The total power of the system is 371 bhp/273 kW and 460 Nm of torque, accelerating from 0 to 100 km/h in 6.2 seconds. The RX 500h uses a new nickel-metal hydride (Ni-MH) battery with low nickel resistance that provides high energy and helps save fuel. Power delivery is controlled by DIRECT4, Lexus’ exclusive new power technology also featured in the new RZ 450e battery electric SUV.

RX 450h+. The plug-in hybrid system implemented in the RX 450h+ is similar to the one Lexus debuted in the new NX. It has a 2.5 liter Atkinson cycle four-cylinder hybrid engine and a rechargeable lithium-ion battery with a capacity of 18.1 kWh. An additional rear electric motor allows Lexus to have an e-Four, all-wheel drive. Although it offers the same power as the previous RX 450h, it offers more torque and quicker acceleration. Total power is 309 HP, and acceleration from 0 to 100 km / h in 6.5 seconds. Lexus CO2 emissions (WLTP combined cycle) are 25 g/km and fuel consumption is 1.1 l/100 km. The range of the EV is 66 km, with the possibility of fully electric driving at speeds up to 130 km / h.

RX 350h. The new RX 350h is characterized by the great fluidity and efficiency of its fourth-generation hybrid system. This 2.5 liter petrol transmission delivers 250PS and accelerates from 0-100km/h in 7.9 seconds, performance comparable to the previous RX 450h, while offering lower emissions. It benefits from the same hybrid component optimization program found in the RX 450h+, including a new hybrid box with a more robust design, lighter weight (~22% mass reduction), lower friction losses and reduced noise (~9 %). , and a more efficient PCU. It has standard equipment and e-Four electric all-wheel drive. The RX 350h represents an alternative to competing models powered by small displacement engines. 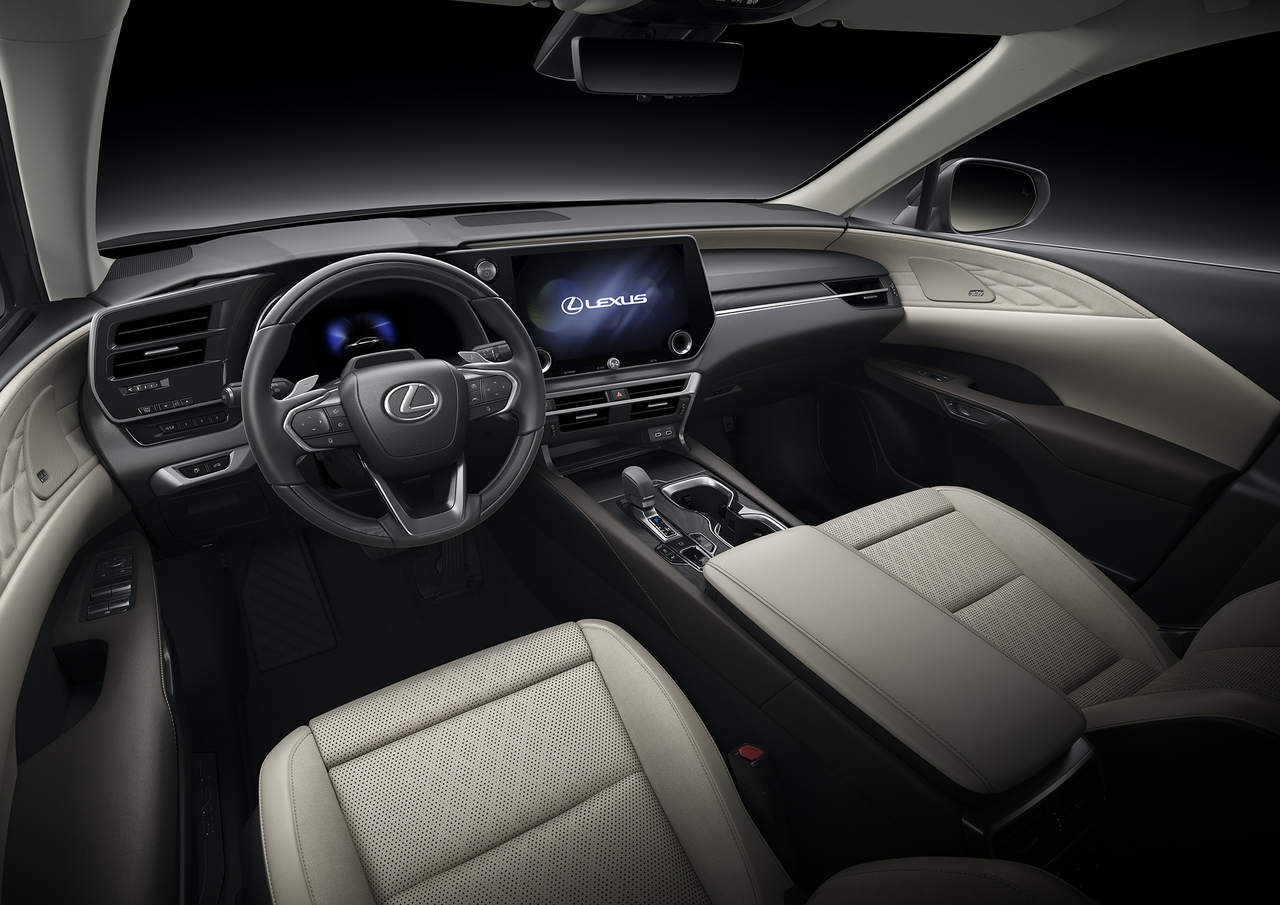 A new chapter in Lexus RX design. Lexus has created a new Next Chapter design language for the new RX, featuring an “hourglass body” achieved by integrating the hourglass grille concept into the front of the car. The “new” feeling is immediate and designed to provide a visual impact worthy of the quality of its three new electric motors.

Model design it remains recognizable as the RX, but with a more powerful, elegant and bold character, a bold appearance and a planted stance. New narrow headlights and a 15mm wider front track emphasize the car’s low center of gravity and solid road presence. In the side view, horizontal continuity has been created by raising the front of the bonnet and lowering the lower edge of the rear window compared to the current RX. This reduces the area above the wheels, creating a solid, grounded appearance.

When the new RX it has the same overall length as the current model, the bonnet has been extended, and the wheelbase has increased by 60 mm. Sculpted faces on the door panels, flared rear fenders and 21-inch wheels add to the sense of change.

Characteristic “floating roof” effect (floating or suspended roof) of the RX, created by the dark pillar of C, is preserved, but with a more three-dimensional appearance. The rear of the car gives a sense of power with a short overhang, a wide track (+45mm) and a large surface area from the wings to the taillights. These are integrated and placed in a sharp band that runs the width of the car and around the corners to emphasize the wide appearance.

Comfort, connectivity and security. “Lexus Driving Signature” of the new RX improves the main characteristics of the SUV, such as the center of gravity, climate measures, weight reduction, stiffness and strength, to create a more natural dialogue between the car and the driver.

It also improves the driving experience, thanks to the intuitive layout, enhanced with the new Lexus Link multimedia system and the “Hey Lexus” onboard assistant, a 14-inch touchscreen and remote functions accessible via the Lexus Link smartphone app.

The new RX offers advanced connectivity which is faster and more stable, offering the latest multimedia technology, “always connected” services and the convenience of over-the-air updates. With smartphone, navigation, car controls and multimedia functions, the driver has about 100 ways to interact with his car. The 14-inch touchscreen, one of the largest in the RX segment, is always standard. In addition to the anti-glare screen there are physical buttons to access the most used functions. The graphics are in HD. In Western and Central Europe, all versions of the RX have an integrated navigation system.

The RX benefits from the third generation of Lexus Safety System +, featuring an improved pre-collision system, New Active Driving Assist and the optional Enhanced Safety Package. Also available is the Lexus Safe Exit Assist system which, linked to the electronic door opening system, prevents the doors from opening if cars or cyclists come from behind.

RX owners they can use the Lexus Link app on their smartphone for a range of functions, including locking and unlocking their car remotely – useful, for example, if they want to use the car for transport. It can also activate the air conditioning system to heat or cool the cabin before taking off. On the RX 450h+, Lexus Link can help the driver schedule charging activities and check the battery level. Lexus Link can also be used to schedule service and maintenance appointments and monitor the driving performance of an owner’s hybrid.

strategy. In 1998, the original RX model gave birth to the luxury SUV segment. It has evolved rapidly since then, most notably becoming the first electric model in the upmarket with the launch of the RX 400h in 2005. Today, with 3.5 million sales, including 300,000 in Europe, it is confirmed as an important Lexus model worldwide. . The fifth-generation RX will reinforce this position with Lexus’ reputation for design and technological excellence. Lexus expects the RX 450h+ to be the flagship RX model, a logical step forward for many of its current RX 450h customers and thus the best-selling RX in Western and Central Europe. 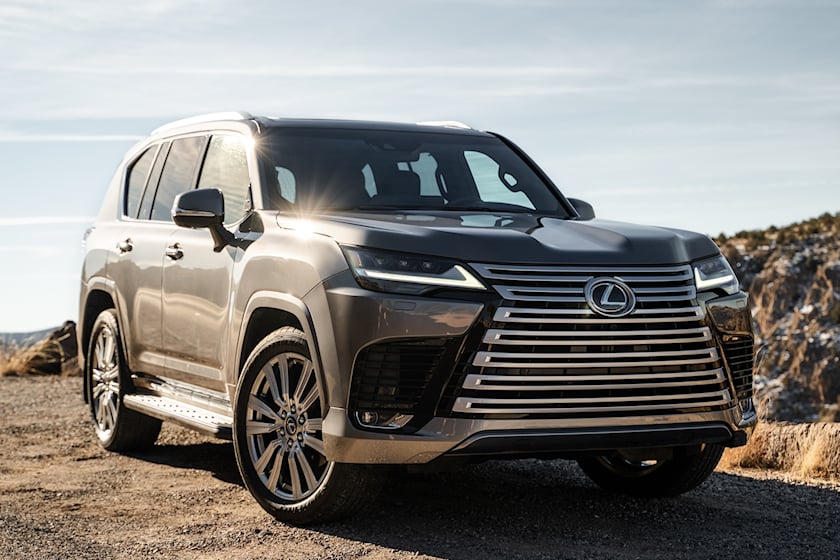