He wants to shake up one of the most popular and advanced groups: the new Mercedes-Benz GLC, now in the second generation of the model – and if you include the angular predecessor GLK, even in the third. The model presented now also shares a platform and many features with the C-Class, and is therefore based on a rear-wheel drive platform designed for high performance.

From the outside, the generational leap is not so great: pleasant, rounded shapes and the usual proportions of an SUV remain. However, the drag coefficient drops significantly to 0.29, and off-road capability can benefit from options such as a camera-based “transparent bonnet” and rear-axle steering.

But there are also changes that will not please every customer. The six- and eight-cylinder engines offered previously are no longer available, the GLC – like the C-Class and the more compact GLB – is only available with four-cylinder units, both with two liters and 48. -volt combinations or as plug-in hybrids.

This diesel hybrid model is a solitaire among premium SUVs. And the fact that it’s self-igniting reduces the shock of using it at the gas station when you don’t have the time or opportunity to let the cleaner-generated electricity go into the big battery packs. Unfortunately, plug-in hybrids are slower than their sister models and the luggage compartment is reduced by 150 liters to 470. The curb weight of the GLC models is between 1925 kg for the weak petrol engine and an impressive 2415 kg for diesel plug.

The new GLC is not cheap: even the GLC 200 costs 57,632 euros. Unfortunately, in the USA the GLC is also available with a rear-wheel drive, which makes it cheaper and more economical, but in Germany the Stuttgart company pays attention to good off-road qualities for all variants. AMG versions will be presented later, but – as with the new C-Class – they only have four-cylinder drives.

We take the presentation of the new Mercedes-Benz GLC as an opportunity to give an overview of the segment and classify the most important competitors – in alphabetical order:

The SUV designed and equipped with power from Alfa Romeo comes with four-cylinder diesel and gasoline engines from 190 hp (140 kW) and a powerful turbo 2.9-liter V6 that delivers 510 hp (375 kW). In other areas the Stelvio lacks perfection, but it makes up for it with personality and character. The elegant design of the Quadrifoglio (four-leaf clover) provides a driving experience in its class. Stelvio prices start at 58,000 euros.

In terms of image, it is not inferior to the GLC, but it has its own style: the Audi Q5 presented in 2017 and updated in autumn 2020, which is also available as a Sportback. The shape is characterized by a double lateral curve, affectionately called “Danube wave” by designers; the drive portfolio ranges from the front-wheel drive 2.0-liter TDI with 163 hp (120 kW) to the sporty SQ5 TDI Quattro with the 3.0-liter V6 TDI with 341 hp (251 kW). The price starts at 49,250 euros, which is below the GLC.

The BMW X3 is on the price list from 53,150 euros, the sister model X4 is a few thousand euros more expensive. There’s a tried and tested SUV with plenty of driving options: Diesel and petrol fans can choose between 2.0-litre four-cylinder engines and the silky-smooth 3.0-litre in-line six-cylinder. At the top of the model range are the X3M Competition and the X4M Competition with the 510 hp (375 kW) 3.0-liter six-cylinder from the M3 and M4 – a pure sports engine. And then there’s the all-electric iX3 with 286 hp (210 kW).

There were times when Gallic brands copied German premium manufacturers, but the DS 7 clearly plays the French card when it comes to design: luxury materials, crystal shapes and classic stylistic features set it apart from the competition. The car portfolio can be managed: a four-cylinder diesel with 130 hp (96 kW), three plug-in hybrids called E-Tense – with an impressive top model offering 360 hp (265 kW). Price from 42,490 euros.

It’s hard to believe that Genesis GV70 starts at just 47,400 euros: Korean offers real high-quality craftsmanship, quality of work and mastery of details beyond the class level. The coupé’s rear end pays homage to the Porsche 928, while futuristic headlamps and a sleek-looking radiator grille dominate the front. Unfortunately, the powerful V6 turbo is not available in Europe, but there is a four-cylinder diesel with 148 kW/201 hp, a four-cylinder gasoline engine with 224 kW/304 hp and a fully electric model with 360 kW (490 hp. )

In a few years Jaguar only wants to offer electric cars, but fortunately for now there is still the luxury F-Pace, whose engine range starts with a 204 hp (150 kW) four-cylinder diesel, six-cylinder diesel, four – four-cylinder gasoline engine and plug-in hybrid and extends to 550 hp (405 kW) 5.0-liter V8 with Forced Air Intake via Root Compressor. The luxury Briton costs from 67,780 euros.

Lexus NX – a solid one

High-voltage hybrid drive with front or all-wheel drive with a system output of 179 kW/244 hp, plug-in hybrid with all-wheel drive and a system output of 227 kW/309 hp: Lexus NX, which costs from 47,600 euros. , combines comfort, unusual design and the proverbial reliability and quality of the brand. After the departure of Infiniti, the only luxury brand from Japan now offered in Germany continues to follow its technical and stylistic approach in many respects.

The best-known version in the segment is Maserati’s Grecale, which is available with four-cylinder hybrid engines from 300 hp (221 kW) or with a 530 hp (390 kW) V6 turbo. Prices start at €71,519, which is not far from a well-equipped Mercedes-Benz GLC. The interior and the materials used leave no doubt about the unique position of the elegant Italian.

So far, few have spoken in favor of the round GLC hatchback variant, which has the larger taillights of the old GLE Coupé: it was more expensive and less practical than the regular GLC, and the shape was controversial. . But now the coupé, which probably won’t be on the price list for much longer, is very attractive: the entry-level price of 54,460 euros is more than 3,000 euros lower, and there are still no AMG versions only with a meaty six. -cylinder or brutal 4, 0-liter eight cylinder and up to 510 hp (375 kW), but also GLC 400d Coupé with the popular 330 hp (243 kW) 3.0-liter six-cylinder diesel.

Porsche Macan – one of the sports

The sportiest offering in the segment comes from Porsche, where the Macan, which is still based on the first Audi Q5, has now got its second facelift. The form drawn by Lamborghini’s chief designer Mitja Borkert still looks modern. There is a 265 hp (195 kW) four-cylinder engine for €65,773, and the sporty, puristic Macan T is also based on this variant. Above are the 380 hp (280 kW) Macan S and the 445 hp (324 kW) Macan GTS, each with V6 engines. Porsche offers diesel and plug-in drives.

Volvo introduced itself in the way of safety, today they are trying to do it through the cold design of Scandinavia and electricity. The Swedes verbally refused to use diesel earlier, but persistent customer demand ensures it remains in the model range. Like the GLC, Volvo relies exclusively on four-cylinder engines with diesel or gasoline engines for the XC60 – here from 197 hp (145 kW). There are also plug-in hybrids with a system output of up to 455 hp (335 kW) and an interesting technical combination of turbocharging and compressor. Despite the high performance, all Volvo models manage 180 km / h. XC60 prices start at 52,200 euros. (Jens Meiners/cen) 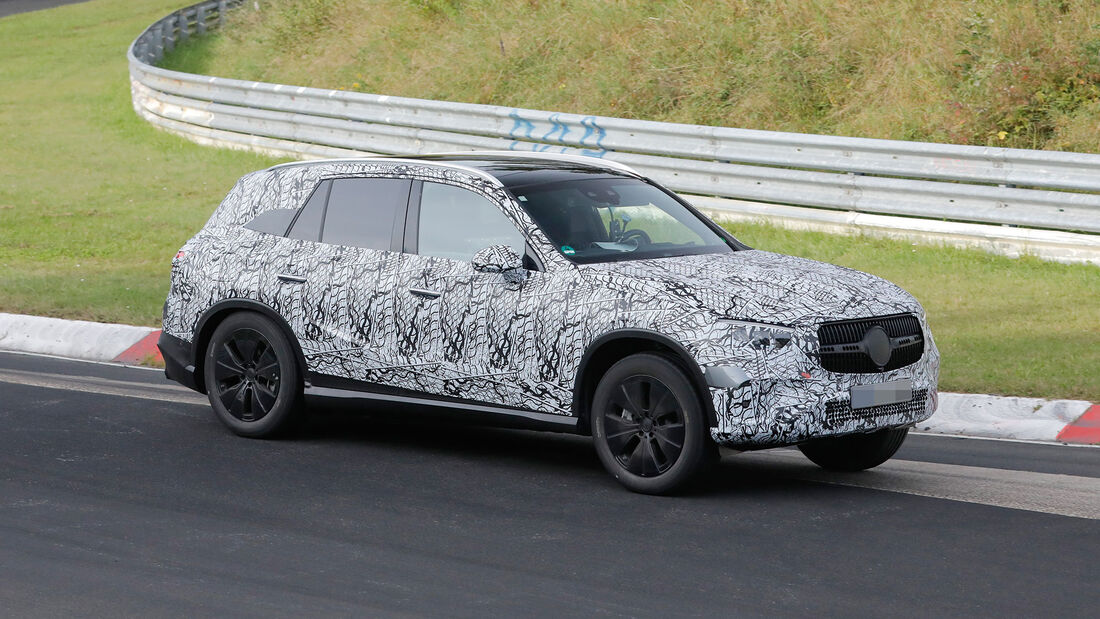 always hybrid, up to 120 kilometers of electricity