Shortly before the second overall victory with the R8 race car at the 24 Hours of Le Mans 2002, Audi launches its most powerful production car. Based on the model of the luxury class A6 (C5 series), the masters of the four rings have introduced a sporty style that stands in the tradition of the powerful RS models.

Sporting confidence in Ingolstadt has grown considerably, not least due to success in the Le Mans long-distance race. As a true road racer, the Audi RS6 eclipses everything Audi had created as a production car up to that point. The displaced 4.2-liter V8 engine, which is forced air intake and twin turbochargers, produces 450 hp like the current DTM Audi of the Abt team, of which the Frenchman Laurent Aïello became the champion this season. Of course, the RS6 also featured Quattro, which has been a hallmark of sports road Audis since Ferdinand Piëch’s brainchild in the early 1980s.

In addition, the name Cosworth fits into the web of stories. The technology division of the Northampton company, which made a breakthrough in 1967 with its Ford Formula 1 engine, was a subsidiary of Audi AG from 1998 to 2004 – it built the RS-V8 in England. More impressive than the high performance is the engine’s constant thrust. A maximum torque of 560 Newton meters is already available in 1900 visits. The 4.2-liter Biturbo does not need high engine speed to convert its power into thrust. Professionals can sprint to 100 km/h with the Audi RS6 in 4.7 seconds and reach 160 km/h in 11.2 seconds.

As long as it goes well, everything is fine with the Audi RS 6. But especially on narrow, hilly roads you can clearly feel the heavy weight of 1.9 tons. Even the luxurious interior gives reason to fear that the RS6, despite its intentions, is carrying too many kilos around.

Despite Dynamic Steering Control, it’s not a pleasant chassis

Despite a drivetrain with track features from Formula 1 and the World Rally Championship, the Audi RS 6 sedan and Avant are not sports cars. The dimensions of the chauffeur-driven limousine are a good 4.86 meters long and 1.85 meters wide. The engineers at Quattro GmbH have made every effort to bring maximum performance to the road.

The RS6 combines the driving performance of a sports car with the looks of a luxury car. This requires a compromise: the 1.9-tonne unladen weight limits quick handling despite the high-quality chassis.

In addition to the expertise of the house in the system of four permanently driven wheels, they developed a damping system for the Audi RS6 with the magic acronym DRC: Hydraulic Dynamic Steering Control connects diagonally opposite fluids and provides an additional damping effect. when cornering. DSC works as a stabilizer.

However, the chassis of the Audi RS6 does not convince in every discipline. Driving through the slalom course had to be stopped several times in the sport auto super test because the car wobbled too much and the rear came out suddenly.

However, the Audi beats its direct rival the BMW M5 in the slalom test. In a comparison test with auto motor und sport, the Audi RS 6 was clearly ahead in terms of driving characteristics. Audi manufacturers did not compromise when it comes to comfort. The RS 6 is designed to be as tough as a sports car. BMW can do it better with the M5 and Alpina with the B10 V8 S.

In general, however, the power sedan from Ingolstadt was only able to win in a three-way comparison. In the overall list, however, the Audi RS 6 ends up in last place because it failed in the list of costs: the Audi was 86,500 euros more expensive than the M5 by 12,000 euros. In addition, the very high insurance premium made driving the RS6 an exceptional pleasure.

More than 8,000 RS6s were built by Quattro GmbH in Neckarsulm, two and a half times less than the BMW M5, although the RS6 still had a trump card up its sleeve: while the BMW E39 series was only available as a notchback sedan Audi also. offers its power sedan as a station wagon.

As with the civilian A6, the boot space of the Audi RS6 Avant can be increased to 1,590 liters by folding down the rear seats: This combination of sportiness and practicality for everyday use is also very popular with the upcoming moderns. Avant was available from April 2004 in the final version as RS 6 Plus with 30 hp more and special equipment. 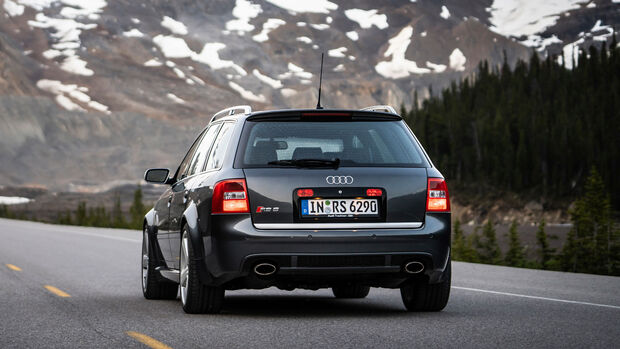 The practical side: the station wagon was in great demand. Audi built 4815 Avants and 2747 sedans. This makes the RS6 a rare car.

The special series, limited to 999 copies, could develop into a highly gifted collector’s item. Of course, this applies especially to the only sedan built in this series, which was the last Audi RS 6 to leave production in Neckarsulm – we hope that the owner appreciates what he has in this one right away.

Audi RS 6 Plus not only has increased engine power, but also manages a top speed of 280 km / h. In addition, Quattro GmbH equipped the RS with a strengthened sports chassis, stronger brakes, a sports exhaust system and 19-inch wheels as standard.

The purchase price of this unique Audi RS6 exceeded the sound barrier of 100,000 euros and reached the level of a luxury sports car. In every case, Audi set the bar very high for sedans and sports car performance. Audi firmly insisted that they could not only challenge their sports rivals in racing, but also in the production of a series of sports and powerful cars.

But the Audi RS 6 has not yet made a breakthrough as a teenager, especially in its normal form: the high engine output is very much hidden behind the usual facade, which differs only from the sister models of the C5 series at a second glance.

Only the front end with air intakes for cooling the charge air, water and oil, large alloy wheels, a small spoiler on the trunk lid and the rear apron are the most common features of the Audi RS 6 – and of course the logo eye-catching. front and back.

Matt silver exterior mirrors and other sills, for example, are only visible to those who like details. Audi RS 6 does not show its character. Even the V8’s very vague sound does not allow any conclusions to be drawn about its character: it sounds as conservative as Heino singing a Rammstein song.

The Cosworth V8 is hidden

The aluminum engine of the Audi RS6 would have what it takes for a real V8 sound to compete with the American big hitter. But his fathers prefer the most powerful Audi of all time to the silent footprints.

This also applies to the engine room: Instead of two banks of beautiful cylinders of the V engine with a bank angle of 90 °, the first thing you see is the red text “Biturbo” and then the large plastic cover that the simple V8. can be read.

Acceleration of the catapult

The pleasure in the Audi RS6 occurs above all when driving, when the powerful biturbo V8 flexes its muscles: the feeling of being pushed into the seat while flying like a catapult is addictive. The temptation to feel the natural power of the Bavarian-British power pack is tempting again and again.

This engine is amazing, and thanks to the five-speed automatic and Quattro drive, the speed seems to be unlimited. That means the pure feel of the Audi RS6.

Even after many years, the body seems to be as solid as a church wall. Thanks to the fully galvanized steel body, little corrosion should be expected even for a long service life. The quality of the body and interior is determined by the care and maintenance of the car. The worst enemy of well-maintained bodywork is hidden or poorly repaired damage. Then the car should be examined very closely. If in doubt, consult an expert

The most powerful 4.2-liter aluminum Cosworth-built engine is not an off-the-shelf engine. Permanent four-wheel drive and the Torsen automatic locking center differential are also high-tech that require regular and professional maintenance: they must be complete with the car and can be verified with a checkbook and workshop invoices. For example, the timing belt should be changed at least every 90,000 km.

Offers on large online markets start at around 15,000 euros. Special cases are models with mileage below five digits and the RS6 Plus, which was built only 564 times.

When it was established in 2002

Supply is done through Audi branches and dealers. With the advanced technology of the RS family, you must be prepared for a high price. The supply is generally considered good, but there may be gaps in individual spare parts. 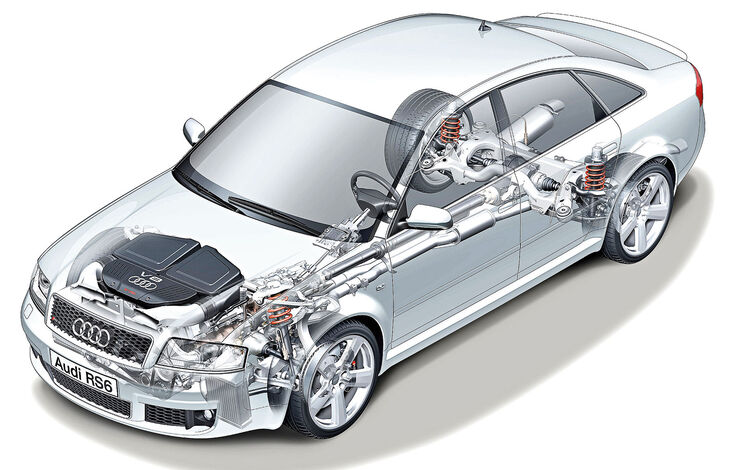 suitable for daily use

The RS6 offers a lot of engine performance for the money. But the low purchase price involves a very expensive risk. In any case, only cars with a complete maintenance history are worth their money. High-performance technology requires maintenance.

I’m torn: The V8 biturbo from Audi is great. But I would prefer less visual degradation – ex works, actually. But the bottom line is that the Audi RS 6 offers a lot of power for the money at current purchase prices.

Profit through power: 20 years of the Audi RS6

New AUDI has appeared in Berlin!

Welcome to Chippendales – striptease and murder in the series teaser [WIDEO]