• An electric car is being researched in the Nissan company.

• The model, of a more compact size, can take the format of the Frontier.

• Last year, the Surf-Out concept suggested that the company was not closed to the idea of ​​an all-electric pickup truck.

The only pickup currently offered by Nissan in Canada is the Frontier, updated for 2021. Note that the full-size Titan model was discontinued two years ago. In the United States, it remains, but the company cannot make impressive gains in the market.

The product is attractive, but the competition is very strong.

However, the company did not intend to accept its fate. According to Automotive News, Nissan is considering building a small electric car for the United States. The latter can fill the gap left by the eventual departure of Titan, but also meet the needs and attract new customers to the brand.

Tyler Slade, chairman of Nissan’s Dealer Advisory Board, told the publication that dealers want the addition of a mid-size electric pickup truck to the company’s lineup. He added that it would make perfect sense for Nissan to offer a model similar to the Frontier in terms of size. For Nissan, success has been mostly with this pickup format; so we swim in familiar territory.

Last year, Automotive News also reported that Nissan was considering adding a pickup truck under the Frontier. Its technical configuration has not been discussed, but the idea was entering the company’s offices.

If Nissan were to act quickly with such a car, it could be a school. The market will welcome several full-size electric pickup trucks in the next few months, but there are no mid-size electric or compact versions on the market. Chevrolet is studying it too.

As a user, it’s interesting to watch. 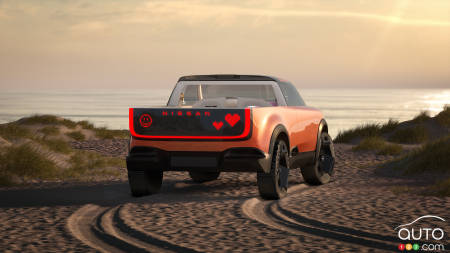 As for the model that a small electric pick-up can borrow, let’s remember the Surf-Out concept that was presented last year by Nissan, as well as other completely crazy models. At the time, the manufacturer said it wanted to launch 15 new electric models by 2030.

It remains to be seen if an electric version of the Frontier will be part of it.

Metaverso is Nissan’s newest tool to enhance the customer experience

An electric and autonomous SUV announces a production model