However, the European Union is constantly tightening the emission standards. Their fulfillment becomes more and more difficult, and in fact becomes impossible in cars with conventional combustion engines. Therefore, manufacturers save themselves by introducing electric and hybrid vehicles.

Mitsubishi did no different, which in 2021 put the Eclipse Cross through a major facelift. At the same time, the combustion versions disappeared from the range, the plug-in hybrid became the only option available. This is the car that went to our editorial office.

A facelift carried out in 2021 changed the appearance of the Eclipse Cross significantly. At the back, the controversial hatch with split glass was removed, and a classic solution was used instead. The front of the car has also changed a lot, there is a new front apron and a large radiator grille that flows smoothly into the narrow lines of the headlights and reflective chrome inserts. It all creates a characteristic image of X. This approach may seem controversial, but in the long run it turns out to be a very attractive solution that you may like.

Compared to the exterior, the interior causes very little impression. The stylistic changes during the facelift were not too big and you can see that the design is already several years old. There are no digital clocks in the car, there is only a small display in front of the driver, surrounded by a speedometer and a clock that shows how the car is working (combustion engine speed, charging, etc.). The screen itself is not of high resolution.

Above the center console is the touchscreen for the infotainment system (the failed trackpad was left behind during the facelift). It is readable, but the graphic solutions used do not look modern. The menu layout could also be more intuitive.

In the car, however, we find a number of physical switches, which may not be fashionable at the moment, but very good. The car is also equipped with a head-up display (HUD). The image is not displayed directly on the front glass, but on an additional glass pane that slides out of the watch cover. Not everyone will like this solution.

There is plenty of space on the back bench (Eclipse Cross wheelbase is 267 cm), as well as on the front seats. Some reservations can be made only considering the capacity of the luggage compartment, which is 359 liters. There can be more in the car, measuring about 455 cm.

Eclipse Cross PHEV has like … three engines and it must be admitted that the operating principle of the hybrid vehicle system is very complex. Two electric motors are installed in the car, which are responsible for driving both axles. The front is 82 hp and the rear – 95 hp. In addition, there is a combustion engine operating in the Atkinson cycle, which produces all … 98 HP from a capacity of 2.4 liters. Its main function is to drive the generator that charges the battery, but it can also drive the wheels through a single-speed gearbox. The system power of the entire hybrid system is 188 HP. The car uses a battery with a capacity of 13.8 kWh. It can be charged from the home network and on fast chargers (the car uses Type 2 and CHAdeMO connectors). The battery takes up to 22 kW of power, so in good weather it can be charged up to 80%. it should not take more than 25 minutes.

A fully charged battery, with careful handling of the gas, should be enough to drive 40 km (in the winter it will be lower), the condition should not exceed the speed of 135 km / h (above this speed, the combustion engine will always. step). Of course, the car can also be driven from the electrical network – then the electricity ensures that the internal combustion engine provides at least a minimum amount of energy to the battery. However, this is not healthy for the battery or ecologically.

The driver can use a special switch to control the battery charge. In Park mode, the car will save the battery to use energy later (in some countries you can move around the city center in electric mode, in Poland plug-in hybrids are treated as normal combustion cars under the act of electromobility). On the other hand, in Charge mode, the internal combustion engine will constantly charge the battery, which will inevitably translate into higher fuel consumption.

Mitsubishi Eclipse Cross PHEV, despite its high system capacity, is not a speed demon. According to factory data, the car accelerates to 100 km / h in 10.9 seconds, and its top speed is 162 km / h. The heavy weight of the car probably contributes to this state of affairs. The heavy battery makes the Eclipse Cross weigh 1910 kg.

It should be noted that the car is very good in city traffic, which is due to the high and immediately available torque (maximum 193 Nm). He may be out of breath until he drives on the highway.

The drivetrain and suspension of the car were modified for less impressive performance. The Eclipse Cross leans a lot in the curves, but you can enjoy a high level of comfort while driving calmly. 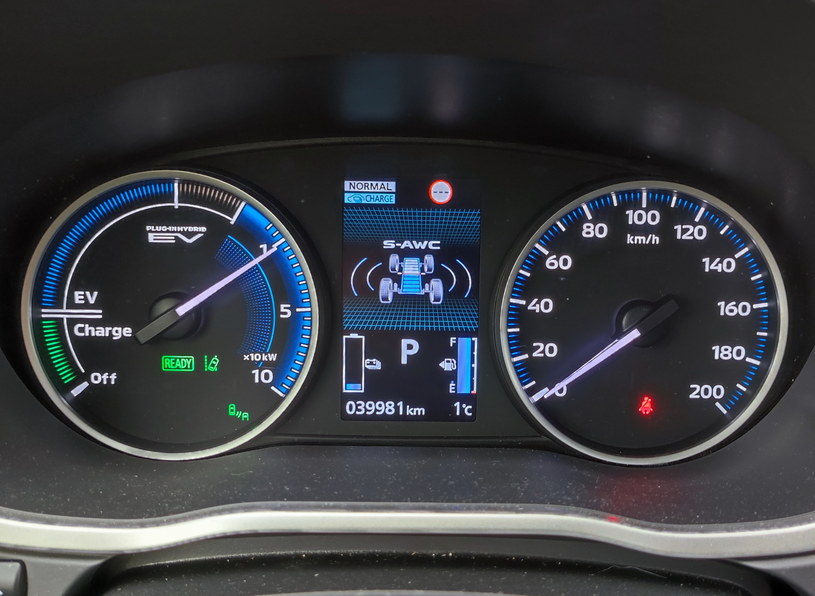 Fuel consumption of plug-in hybrids is a difficult parameter to determine, after all, it all depends on whether and how often we charge the car. Connecting to the Internet every day will make the Eclipse Cross almost fuel-efficient for most drivers (40 kilometers of real range in electric mode). You can also drive completely free, but then there is no point in buying a plug-in hybrid. First of all, we carry a heavy and empty battery with us, secondly, the internal combustion engine will try to charge them at least a little, so the car will burn more fuel than a normal car in which the internal combustion engine only drives the wheels. .

However, when going on a long route, which means that the battery is discharged, you must consider fuel consumption of around 7 l / 100 km. Up and speed dependent again, it will be on the highway.

As you can see, the Mitsubishi crossover is not a bad car. It has a spacious interior in the old, proven style, it can be loaded and run cheaper than petrol, it is comfortable and it is equipped with several safety systems and a drive on both axles. So why is it not visible on the road?

As it turns out, it’s all about the price. When the Eclipse Cross hit the Polish stores in 2018, its prices started from less than 100 thousand. PLN, while the cars were powered by a 1.5 turbo gasoline engine of 163 HP, equipped with a manual gearbox and front axle drive. The richest version with automatic transmission and four-wheel drive was the most expensive – it was worth 134,000. zlotys.

It’s just that emissions standards meant that the 1.5 turbo engine disappeared from the offer, replaced by a PHEV drivetrain. And for this “green” version you have to pay … a lot more. Catalog prices for cars from 2022 start at PLN 210,990 (Intense Plus version) and end at PLN 221,990 (tested Instyle Plus). In this case, the fact that both versions are currently covered by a PLN 5,000 discount does not change much. zloty…

The Mitsubishi Eclipse Cross PHEV is a compelling reason

Subaru Soltera: on the scene