(Motorsport-Total.com) – Rally Japan’s return to the World Rally Championship (WRC) 2022 will end this Sunday with a one-two for Hyundai and a painful home defeat for Toyota. After 19 special stages, Thierry Neuville won ahead of teammate Ott Tänak in the season finale. Local hero Takamoto Katsuta (Toyota) salvaged Japanese honors in third place.

Thierry Neuville took his second win of the season in Japan

Fourth place went to Elfin Evans (Toyota), who lost his chance for his first win of the season due to a puncture on the final day. His teammate Sebastien Ogier finished fifth ahead of Gus Greensmith (Ford).

Third place in class was enough for Lindholm to win the title in the WRC’s “second division”, while Formula 1 winner Kovalainen won the championship mark for the first time in the World Rally Championship.

“It’s a good feeling!” said Neuville after his second win of the season and fifth for Hyundai. “It wasn’t an easy weekend and it wasn’t an easy year, but to finish with a win and show good speed all weekend is a great way to end the season.” 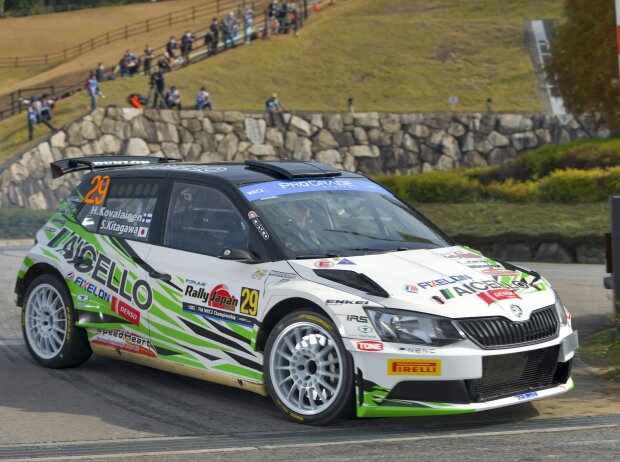 Neuville drove at the front in the WRC’s return to Rally Japan after a twelve-year break from day one. On Friday, a three-way battle emerged for the lead. Evans was leading after Friday, followed by Neuville and World Champion Kalle Rovanperä (Toyota), 3.0 and 5.1 seconds back respectively.

On Saturday, Rovanperä bid farewell to the battle for the lead after slipping and causing a pit stop, which continued to blow between Neuville and Evans and deepened on Sunday in intermittent rain. In the first special stage of the final day, the Toyota driver reduced the gap to Neuville to 0.6 seconds.

But then Evans was burned in Sunday’s second special stage and lost 1:46.7 minutes to Neuville, which made the decision. “Maybe I went too far in the right-hand bend. The letter was correct, but I didn’t get it in time to break the car in time. There was nothing I could do about it,” reports the Welshman.

After that, Neuville just had to drive home the win. At the finish, he was 1:11.1 minutes ahead of Tänak, who said goodbye to an uncertain future with Hyundai’s podium result.

Podium at the home of Takamoto Katsuta

“It’s good to be on the podium. In the end it was very difficult. We didn’t have that much speed in the last two events on the tarmac, but we still won a few rallies and grabbed a few podium places,” he concludes. Thank you. “Let’s see what the future holds. I’ll go home and we’ll see what happens in the next few weeks.”

To the delight of many fans on the tracks, Katsuta achieved the second podium result of his WRC career in his home country. The young man was the only Toyota driver who passed the meeting without any major problems and was therefore happy.

“A big thank you to the team and all the supporters on stage and also on the road,” said the Japanese. “Unfortunately, my teammates had a lot of problems.” This also affected Ogier, who lost almost three minutes on Friday due to a puncture and therefore lost his chance to get a podium result in the first start with new co-driver Vincent Landais.

After Paul Nagle retired, M-Sport driver Craig Breen also had a new co-driver in Japan, but the first start with James Fulton was unfortunate. On Friday, on the fourth special stage, Breen lost his brakes, hit a guardrail and slid down the slope. Consolation for the Irishman was victory on the Power Stage on the final day.

A total of three of the 19 scheduled stages had to be canceled for safety reasons. Responsible for this was also Friday fire on Dani Sordo’s Hyundai. During the second special stage, the car caught fire for an unknown reason and was completely burnt. Sordo and his passenger were not injured.

A dangerous incident on Friday caused bad headlines when a civilian car entered the track contrary to the fourth special stage while the stage was still running. The FIA ​​then threatened to suspend the meeting if another such incident occurred.

Title decisions in the top division had already been made in favor of Rovanperä and Toyota before the end of the season. The WRC is now taking a short winter break.

The 2023 season traditionally begins with the Monte Carlo Rally, which will take place from January 19 to 23, 2023.

Ott Tänak wins the Ypres rally, Thierry Neuville will not enter the top 10 for his people | public meeting

LIVESTREAM: Who will lead the Ypres Rally? | public meeting

LIVESTREAM: Who will lead the Ypres Rally? | public meeting

LIVESTREAM: Watch the Ypres march with Neuville in the lead | public meeting