This Ford Transit Low profile is compact like a bus. It goes for a sporty look and offers plenty of storage space thanks to the butterfly bed.

Does he seem to know you too? Like distant friends? Then you are not alone. Outside the new Challenger Sport Edition is not only reminiscent of the Challenger X150, which celebrated its debut on the Fiat Ducato last year, it is the manufacturer’s answer to the current shortage of chassis at Fiat.

With the Challenger Sport Edition, the Ford Transit brings a sporty 170 hp.

The Challenger X had to be dropped from the program due to delivery problems – Challenger quickly transferred the concept of the slim T design, which resembles a camper van, to the Ford Transit. And, whoosh, it became the Challenger S Sport Line. 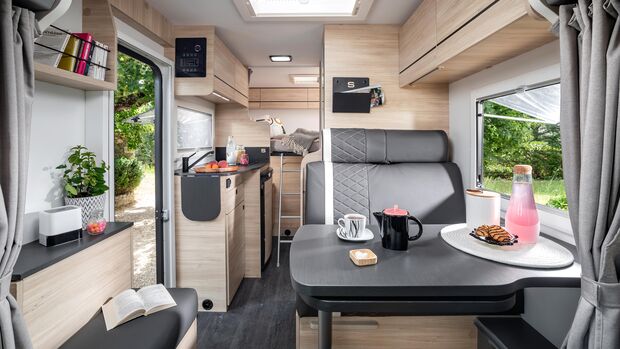 The S is by no means an identical twin with a different engine. Ford’s slim 2.10 meter semi-compact model offers two completely independent, separate models. The Challenger S 194 Sport Edition shown here has a special transom bed. It consists of two mattresses and if you look at the bottom, also two slatted frames.

The curved front frame can be folded – almost like a butterfly wing. At the bottom, at the head and end of the legs, there are cupboards and drawers for storing clothes. There is a hatch under the bed that serves as a hatch into the rear garage. For example, at night or when the temperature is low, you can access everything stored in the back from the inside. 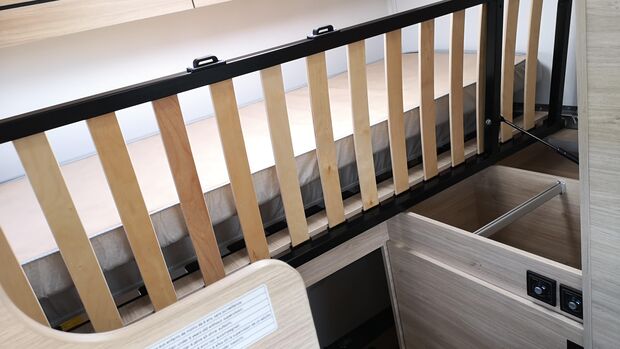 If half of the rear bed is folded down, cupboards with a clothes rail, storage space and a rear shovel in the rear garage are visible.

Unfortunately, the garage is so big that even bicycles can be transported in it. Lighting, lighting and power connections in the garage are also available. Although the S 194 is only as small as a 5.99 meter camper, it has a big advantage of station wagons: lots of storage space in the back.

The equipment of the mobile home also includes a Webasto heater and an external flap, behind which the power fuse box and water connections are easily accessible. 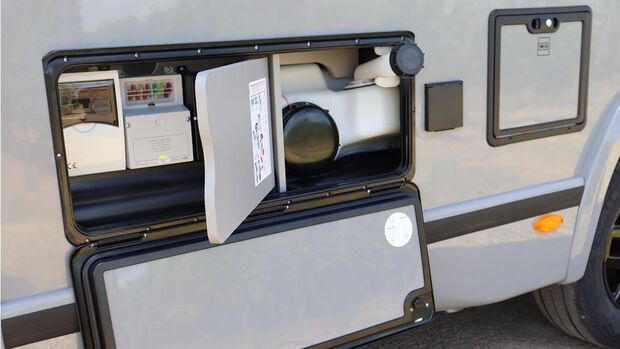 Everything in one place: the power box and water tank management are behind the outer flap.

The Challenger Sport version also has a 170 hp engine, automatic transmission and special upholstery. The “S” Edition logo can be found as a decorative element on the car and is meant to refer to the S as well as sportiness, speed and style. Practical truth: S is in some places where hooks or shelves are connected.

In the middle of the mobile home included in the Challenger S 194 Sport Edition there is a kitchen with a two-burner stove, sink and refrigerator. The opposite is a compact bathroom. Since it has a rotating wall, the sink can slide over the cassette toilet to create a shower room. 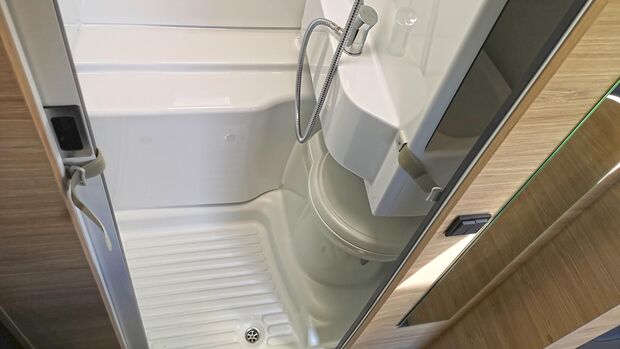 The sink swiveled away – the compact bathroom becomes a shower cubicle.

Up front, the semi-inette seating group is completed by a stool behind the front passenger seat. You can even sit here with five people or put your feet up comfortably on the swivel passenger seat. The Challenger does without a large storage compartment above the cockpit. As a result, the living space looks airy despite the narrow car. The pieces of furniture have no handle and without frills and emphasize the modern look with light wood color and surfaces in anthracite.

The price has not yet been set

Challenger intends to announce further technical specifications and the second layout of the S 217 with single beds at the Düsseldorf Caravan Salon. Then the price of the Ford semi-trailer should also be revealed.

Fiat’s grandfather of the presented Challenger S 240 should cost around 60,000 euros at the base price. Considering the general price increase, the price of Sports Line will definitely be higher. There is a lot of living comfort and equipment.

Porsche presents the unique version of the Taycan GTS Hockenheimring