As the representatives of the German manufacturer assure – the development of the 911 GT3 R racing model began in 2019. When it came to developing the next generation of the pronounced machine, the priority was to increase efficiency and improve driving ability at the same time. An equally important goal was to improve the car’s serviceability and reduce its operating costs.

The heart of the car is a liquid-cooled six-cylinder unit with four valves per cylinder and direct fuel injection. The main novel is the displacement: similar to the 911 RSR, it has increased by almost 5%. – from 3997 to 4194 cm3. As a result, the maximum power increased to about 565 hp. Porsche engineers have also improved the torque and power curves across the tuning range.

The lift unit handles the turbo free and is basically located at the rear of the car, which improves traction and braking performance. The engine, however, has been tilted forward by 5.5 degrees, allowing more space for the diffuser under the chassis. Auxiliary units such as the alternator and A/C compressor are moved a good meter forward and secured in front of the engine and gearbox. This has a positive effect on the weight distribution of the 911 GT3 R. The six-speed sequential mesh gearbox comes from the current 911 GT3 Cup. The shift paddles control the gearbox’s electronic “drum” function, which enables quick and precise gear changes. 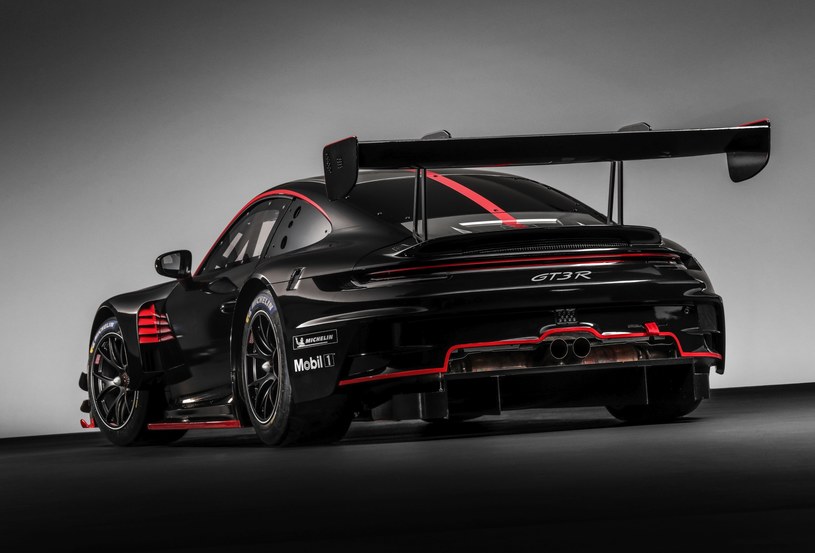 The suspension of the new 911 GT3 R also contributes to the improved handling. Many detail improvements translate into more precise handling, less wear on the rear tires and less time required for setup changes. To achieve this, many features and technical solutions come from the 911 RSR. A set of double wishbones is used in the front and the rear axle has a multi-link design. Additionally, the reinforced KW shock absorbers offer five adjustment settings.

The new 911 GT3 R is Porsche Motorsport’s second racing car, after the 911 GT3 Cup, based on the current generation of the 911. Its lightweight body, made of an intelligent combination of aluminum and steel, is based on the production version, but has been extensively modified for the GT3 R. Almost all parts of the body, including the front and rear hoods, doors, side panels, rear wing and roof, are made of carbon fiber. Aramid fibers were used for the manufacture of wheel arches.

The new 911 GT3 R has a high bar. Its predecessor won almost everything there was to win in GT3 competition. His greatest achievements include victory in the overall standings of the 24 Hour race at the Nürburgring circuit as well as at Spa-Francorchamps. The Porsche 911 GT3 R also won the 24 Hours of Daytona and the 12 Hours of Sebring.

Porsche Motorsport offers the new 911 GT3 R at a price of 511,000 euros. This does not include VAT and optional extras.

Moto Flesz – episode 49. Car sales in Poland are down, surcharges for electricians in Germany are down
INTERIA.PL

The Porsche 911 GT3 R has been launched. The competition can be scary!

Mazda CX-60 e-Skyactiv PHEV – On the road in the new large SUV from Mazda » AutoNatives.de

Test – For long journeys you must have the Fiat 500e