After months of speculation, Toyota registers its next domestic hybrid with the Daihatsu platform at INPI

For several months, Toyota made a mystery about its new national car. It was only known that it would be a hybrid model and that it would use a Full Hybrid system like the Toyota Corolla. Now the secret is over. The Japanese automaker registered the design of its new model with INPI, which will be a compact sedan and is based on Daihatsu (Toyota’s low-cost brand).

The photos of the INPI registration, which we present here, were published by the specialized website Motor1. In Last September Guia do Carro published an article about what this model would have and now one of the options has been confirmed: it will be a new generation Toyota Yaris.

This means that the investment in the new Yaris will be huge. It is possible that Toyota will keep the current Yaris in production and launch a new car with a different name, Yaris Active, which we show in August? It is possible, but it seems difficult. Toyota usually does not have this kind of strategy, which has been used several times by GM, Renault, Fiat and Volkswagen. And the current Yaris does not help in terms of decarbonization.

Therefore, the new Toyota Yaris Sedan should come to compete directly with the Honda City, as the current model has lagged behind the new generation of the Japanese rival. This also means that the price will be higher. And it still leaves the future of the Yaris Hatchback in doubt, which, in principle, should be suspended until the arrival of a new generation in this configuration.

The new Toyota Yaris is already on sale in Peru and is also registered in Argentina. It is possible that Toyota do Brasil will export the Yaris Sedan from the DNGA platform to the Peruvian market.

But we strongly bet on the hybrid version with the same system as the Corolla Hybrid, that is, with two electric motors that add up to 72 hp. This is because Toyota has already revealed this intention for another special car, AutoData magazine, as we said on Article published in September the past.

It remains to be seen if Toyota will be able to use the flex 1.8 engine to accompany the hybrid system, as in the Corolla and Corolla Cross, or if it will introduce a new system that combines the 1.5 engine with two electric motors. Or the 1.2 or 1.3 engine available in other markets will be used.

The Toyota Yaris arrives on the 2023 lineup with great modifications: 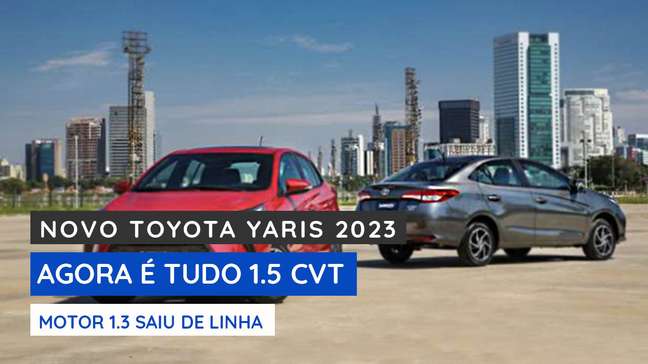 The next Toyota Tacoma has been revealed in patent images

New Hilux 2024? Toyota registers a truck that has never been seen in Brazil

The new Toyota Yaris has been registered in Brazil by Daihatsu

The Toyota Yaris wins a visual change, but not for Brazil

Toyota Yaris 2024, possibly a hybrid, is registered in Brazil

seniors are crazy about these 10 examples

7 of the most innovative cars for drivers on a budget

The new Toyota Tacoma has been registered in Brazil