Cadillac has now opened a new chapter in the modern discipline of “salami techniques” that automakers use to introduce new part designs — dark, drowsy graphics, headlight peeks, blurry videos. The American luxury car maker had shown some very subtle and stylish pictures of the new Escalade V-Series earlier and reveal: nothing. Also an idea.

Even before the debut of the Escalade-V, the successor to the CTS-V, the CT5-V Blackwing, had hinted at the direction that the SUV was in terms of engines: a 6.2-liter V8 gasoline engine, on the current Escalade with 420 hp at the end of the flagpole, it is sent towards 700 hp by means of a 2.65 liter compressor of forced ventilation and fine tuning inside the engine. The big engine in the CT5-V Blackwing delivers 668 SAE hp, which equates to 677 hp when converted to European currency. However, the Escalade V-Series tops that.

According to the manufacturer, this is the most powerful SUV in the entire industry. The dimensions of Cadillac’s first V-Label SUV are truly impressive. A supposed supercharged 6.2-liter V8 sits behind the front, which is as big as the house’s facade. From Cadillac pressed 690 hp and 885 Newton meters of maximum torque. This power pushes the 2.9 ton monster to 100 km/h in 4.4 seconds. Cadillac assigns a ten-speed automatic with power management, the transmission to all four wheels is done as needed in real time. However, the manufacturer still owes information about fuel consumption – but maybe as a customer you don’t want to know exactly that. The truth is: the tank of the standard version of the SUV has 91 liters, the XL variant with a longer wheelbase swallows a maximum of 107 liters.

Compared to the unit in the CT5-V Blackwing, the Escalade V8 has a larger compressor (2.65 liters).

You can leave it out, but a little classification is fine. Especially since local audiences don’t necessarily have a Cadillac Escalade on their screens right away; The group managed only 40 new registrations in Germany in the whole year 2021. In the standard version with a length of 5.38 meters and as an XL variant with a length of 5.77 meters, it is the undisputed flagship of the brand, in 2020 the current trend celebrated its debut. Its equipment is already very much, but at least 150,000 dollars (143,500 euros) expensive V model Packs Cadillac really complete.

The Americans promise twice the pixel density for the front of the display compared to 4K televisions, a total of 38 inches. Apple Carplay and Android Auto are operated via WiFi, voice control, augmented reality and a sound system with 36 speakers as well. There’s also the GM Super Cruise system, which includes adaptive cruise control including lane keeping and shift assist. To do this, the system uses cameras, GPS, radar and lidar sensors. 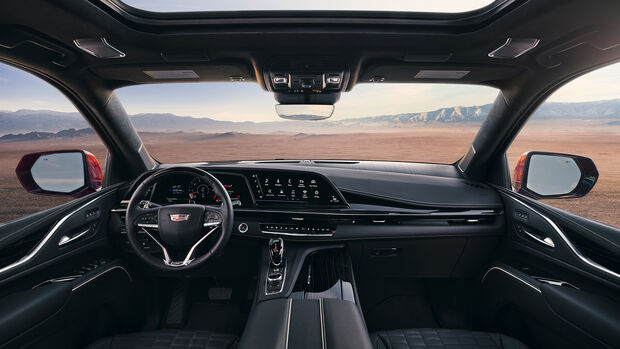 When it comes to accessories, Cadillac leaves nothing to be desired.

Air suspension including magnetic dampers is responsible for comfort on all seven seats. When it comes to dynamic cornering, e-LSD (electronic limited slip differential) comes into its own. The six-piston Brembo system ensures smooth deceleration. Cadillac has given late summer 2022 as a market launch date.

At Cadillac, the V Series is the sportiest model, which is limited to performance by the General Motors Performance Division (according to BMW M or AMG). In Germany, the most famous representative of this V series is the Cadillac CTS-V, sports car editor Christian Gebhardt. dubbed the “Four Door Corvette” in its comparison test characterized.

In late summer, the Cadillac Escalade comes as a V-Series model with a powerful V8 engine with 690 hp. To us? Certainly not, only through gray imports.

Will you buy Sylvester Stallone’s extended Cadillac for $350,000?

T-Mobile adds important functionality to the My Heyah app